A sucker rally, aka a “bull trap” is defined as a temporary  rise in a specific stock or market, occurring with little fundamental information to back the movement in price and which may continue just long enough for the “suckers” to get on board, after which the market  or specific stock falls.   This market started last week under a cloud of poor export estimates and technical indicators which, on balance, were pointing prices towards a southerly, or at best a sideways, direction.

But instead of falling, or at least moving sideways, the benchmark May 2010 contract shot up in early trade to a high for the week of RM2,662. But this market, as though coming to its senses, fell with a palpable thud before the week was out, giving back all its earlier gains and finally settling last Thursday at RM2,595 a tonne, down a nominal RM1 over the week. (This market was closed last Friday for a public holiday). So what happened?

Early joy, for those who were suckered into thinking that a new bull phase had begun. turned to dismay, that’s for sure. Those who cashed out when this market shot up above RM2,650 received Chinese New Year ang-pows. But the other players, probably the majority who in a panic liquidated their long (buy) positions – or were forced to liquidate because they could not or would not meet margin calls — suffered losses. Conclusion: The technicals overall point to further price weakness ahead. RM2,580 is the critical immediate support level, a decisive breakdown below which could trigger an avalanche of stop-loss sell orders. 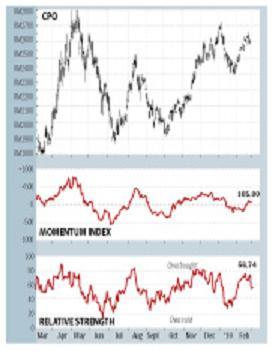 HOW TO USE THE CHARTS AND INDICATORS THE BAR AND VOLUME CHART: This is the daily high, low and settlement prices of the most actively traded basis month of the crude palm oil futures contract. Basically, rising prices accompanied by rising volumes would indicate a bull market. THE MOMENTUM INDEX: This line plots the short/medium-term direction of the market and may be interpreted as follows: (a) The market is in an upward direction when the line closes above the neutral straight line and is in a downward direction when the reverse is the case.
(b) A loss in the momentum of the line (divergence) when prices are still heading up or down normally indicates that the market could expect a technical correction or a reversal in the near future. THE RELATIVE STRENGTH INDEX: This indicator is most useful when plotted in conjunction with a daily bar chart and may be interpreted as follows: (a) Overbought and oversold positions are indicated when the index goes above or below the upper and lower dotted lines.
(b) Support and resistance often show up clearly before becoming apparent on the bar chart.
(c) Divergence between the index and price action on the chart is a very strong indication that a market turning point is imminent. The subject expressed above is based purely on technical analysis and opinions of the writer. It is not a solicitation to buy or sell.