14 years ago
OBSERVATIONS: Caught in the swirl of almost equally strong and opposing demand-supply cross-currents in global edible oil markets, players held back from taking firm positions while they pondered which of the forces would prove the stronger. And while they pondered, the major global edible oil futures markets – US soyabean oil and the Kuala Lumpur CPO futures markets – ended up going nowhere.

The local palm oil futures market got a strong fillip at first from the latest – and encouraging – export estimates. Industry monitors Societe Generale de Surveillance and Intertek Technical Services put July 1-20 exports at a combined average of 894,000 tonnes, up some 104,000 tonnes or 13.0 per cent compared with that shipped out in the similar period in June.

The jump in export demand apparently came from orders from India, which “experts” expect will overtake China this year as the world’s No.1 importer of vegetable oils. Because of unseasonally low monsoon rainfall, India is reportedly facing a shortfall in its production of soyabean oil, groundnut oil, and other vegetable oils

The Indians are not likely to face a shortage of cooking oil though. That’s because Indonesia has just cut its palm oil export tax to zero from 3 per cent in July and reduced the crude palm oil base export price to US$574 a tonne from US$683 (US$1 = RM3.54) in July, in an apparent bid to attract and cash in on heightened Indian demand ahead of Diwali, or the Festival of Lights.

On the other side of the Pacific, however, the US reportedly could be reaping a bumper soyabean crop this autumn, which is why the year-to-date gain for soyabean oil is only 1.80 per cent compared to palm oil’s 25.19 per cent price rise thus far this year.

Conclusion: Judging from the short- to medium-term global edible oils demand-supply scenario and the technical indicators, the force is still with the bears.

But because this market punctured the erstwhile RM2,130 short-term overhead resistance level on the upside last week, this market is now technically in a short-term RM1,990-RM2,160 trading range consolidation mode. 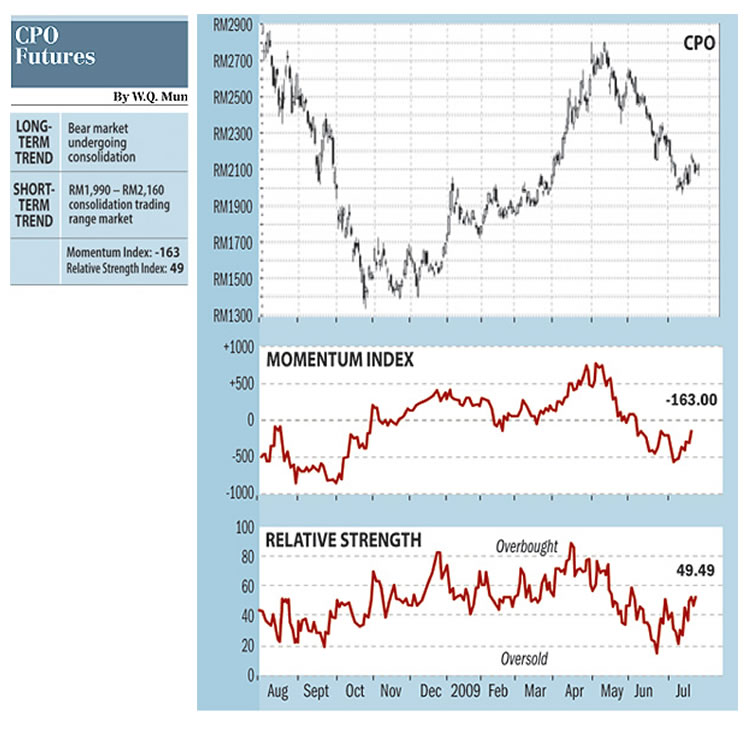