OBSERVATIONS: The Kuala Lumpur Crude Palm Oil (CPO) futures market saw bullish action last week. The bull run was triggered off by the setting off of a bear trap, and ramped up by fierce and frantic short-covering. The October 2010 contract rose to an eight-month high, closing last Friday at RM2,661 a tonne, up RM144 or 5.72 per cent over the week. 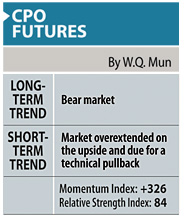 The technicals had indicated the previous week that this market was prime for a technical rebound – and raring for bullish action. All it needed was a spark, and the market’s fuse was lit for the lift-off.

Some market observers saw the latest export estimates as the “spark” that sent prices rampaging up the price chart. Export monitors Societe Generale de Surveillance (SGS) and Intertek Agri Services’ (IAS) July 1 to July 25 export estimates averaged 1.406 million tonnes, up 60,000 tonnes or 4.47 per cent compared to that of the similar period in June. Buying and short-covering snowballed on market-inciting talk that Bangladesh would be buying in a big way to stock up on cooking oil ahead of the Hari Raya Puasa festive season, slated to start on September 10. But others saw the bull run in wheat prices, set off by drought and wildfires in Russia which has destroyed a fifth of its crop, as the real “spark”. Conclusion: This market had overshot and over-extended itself into extremely high overbought territory. An imminent technical correction – which could turn out to be a minor pullback on its way further up the price chart – would be in order. 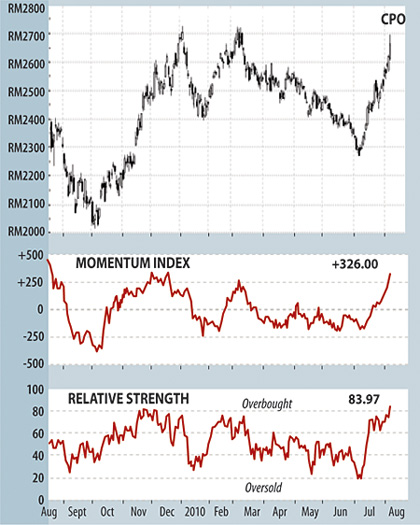 HOW TO USE THE CHARTS AND INDICATORS # THE BAR AND VOLUME CHART: This is the daily high, low and settlement prices of the most actively traded basis month of the crude palm oil futures contract. Basically, rising prices accompanied by rising volumes would indicate a bull market. # THE MOMENTUM INDEX: This line plots the short/medium-term direction of the market and may be interpreted as follows: (a) The market is in an upward direction when the line closes above the neutral straight line and is in a downward direction when the reverse is the case.
(b) A loss in the momentum of the line (divergence) when prices are still heading up or down normally indicates that the market could expect a technical correction or a reversal in the near future. # THE RELATIVE STRENGTH INDEX: This indicator is most useful when plotted in conjunction with a daily bar chart and may be interpreted as follows: (a) Overbought and oversold positions are indicated when the index goes above or below the upper and lower dotted lines. (b) Support and resistance often show up clearly before becoming apparent on the bar chart. (c) Divergence between the index and price action on the chart is a very strong indication that a market turning point is imminent. The subject expressed above is based purely on technical analysis and opinions of the writer. It is not a solicitation to buy or sell.
Source : Business Times by W.Q.Mun
]]>
You can share this posts: