OBSERVATIONS: ‘Tis the season to be merry. But risking one’s money in high-leveraged high-risk futures markets and worrying about its outcome over the extended Christmas and New Year holidays is, for many, no way to be merry.

That was the reason many in the Kuala Lumpur CPO futures market sought the safety of the sidelines last week, by liquidating their positions and taking money off the table. As a result, this market took a plunge in early trade last week, recovering some last Thursday ahead of Christmas on short-covering to nail down profits.

The actively-traded March 2010 contract was sold down in early trade to a low of RM2,482 a tonne, managing only to claw back some losses to close on Thursday at RM2,554 for a RM66 or 2.52 per cent loss over the week.

Interestingly, the market bounced back after failing to penetrate the downside RM2,495 immediate and short-term support level. The daily average turnover of 5,604 contracts for the benchmark third month forward contract, notably lower than the previous week’s 6,812 contracts, was indicative of lower investor participation ahead of the Christmas and New Year public holidays.

The market’s weakness also was due to the continuing poor month-to-date export performance. Export monitors Societe Generale de Surveillance and Intertek Agri Services’s combined average December 1-20 estimate for palm oil exports amounted to 871,000 tonnes, down 71,000 tonnes or 7.40 per cent from that shipped out in the corresponding period in November.

Conclusion: Nothing much of significance is expected to happen this week ahead of the 2010 New Year holidays. Low volume trade within fluctuations within the short-term RM2,495-RM2,620 trading range is likely to be the order of the day.

THE RELATIVE STRENGTH INDEX: This indicator is most useful when plotted in conjunction with a daily bar chart and may be interpreted as follows:
(a) Overbought and oversold positions are indicated when the index goes above or below the upper and lower dotted lines.
(b) Support and resistance often show up clearly before becoming apparent on the bar chart.
(c) Divergence between the index and price action on the chart is a very strong indication
that a market turning point is imminent. 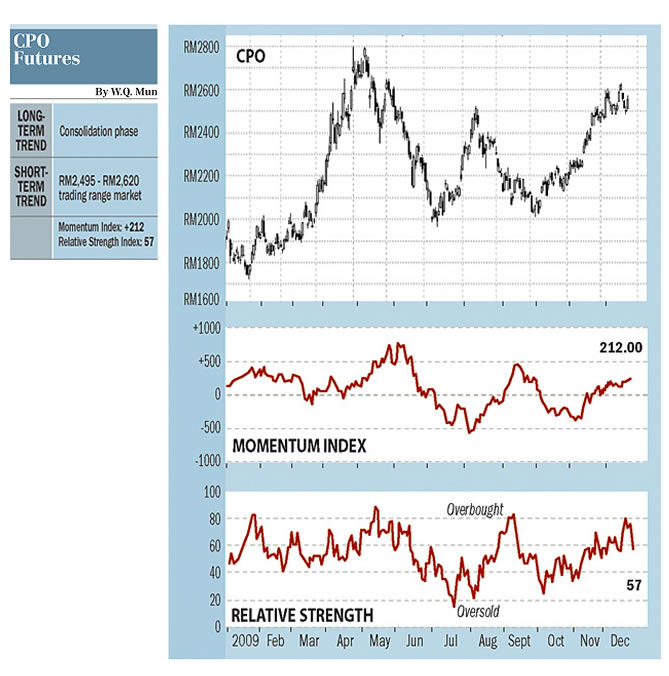