OBSERVATIONS: The Kuala Lumpur CPO futures market did what the

technicals had the previous week indicated it would do: break through on

the upside the erstwhile RM2,570 a tonne overhead resistance level. In

so doing, it also has signalled that this market is now back on the bull

track – at least in the immediate and foreseeable short term. 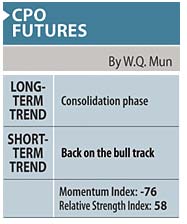 before staging a sharp recovery to settle last Friday at RM2,590, up

The breakout signalling the

advent of a new short-term bull phase, however, came very late – in the

last hour of trading last Friday. It also is a sign that market players

Last week was particularly interesting and

instructive from a trading and technical point of view. A lot of

players were frazzled and whipsawed. And they lost a lot of money,

Friday, sending many scurrying for cover by disposing of their short

Conclusion: Market players who had not covered their money-losing

short positions last week will probably want to do so today, and maybe

also tomorrow. The expected frenzy of short-covering activity will send

prices higher up the price chart in early trade this week.

TO USE THE CHARTS AND INDICATORSTHE BAR AND

indicate a bull market. THE MOMENTUM INDEX: This line

correction or a reversal in the near future. THE RELATIVE