OBSERVATIONS: Wait and see. That is the stance Kuala Lumpur CPO market players appear to have taken, probably because the leads the market was getting did not jibe with talk of a supply squeeze and so-called “expert” prediction that the palm oil price should hit the magic RM3,000 a tonne target sometime before the end of this year.

So market players are holding their horses. And that is why this market went through one of the most excruciatingly boring phases last week.The benchmark November 2009 contract meandered within a narrow band between RM2,323 and RM2,402, well within the short-term RM2,240-RM2,465 trading range parameters, on low turnover. The benchmarket contract closed last Friday at RM2,366, up a nominal RM21 or 0.90 per cent over the week.

To be sure, there was no lack of leads, but certainly not the type of leads that bullishly-minded market players wanted to know – or hear – about.

The latest export estimates, for one, should have had the bulls scurrying for cover – if they had taken heed. Export monitors Societe Generale de Surveillance (SGS) and Intertek Agri Services’ (IAS) estimates of a combined average of some 1 million tonnes shipped out in the August 1-25 period was down a whopping average of some 101,000 tonnes or 8.75 per cent compared to that for the similar period in July. Surprising, considering that the the Hari Raya (end of Ramadan) festivities is still three weeks from now, one would have thought our Muslim customers in Pakistan and India would need more cooking oil.

But then the latest news is that India and the US Midwest grain belt have lately been getting a lot of beneficial rains, good for production. Which explains why US soyabean oil futures fell last week.

Conclusion: There is nothing in the technicals that suggest that the July through through August short-term RM2,000-RM2,500 rally has run out of steam. Neither is there anything to suggest that this market could do a sharp U-turn down the price chart anytime soon.

In short, unless a catalyst appears to propel this market either way, market players may well have to put up with more of the same stupor and lethargy.

The August 2009 export estimates, which should be public knowledge today, could have a bearing on trading this week, depending on what market players make of them. 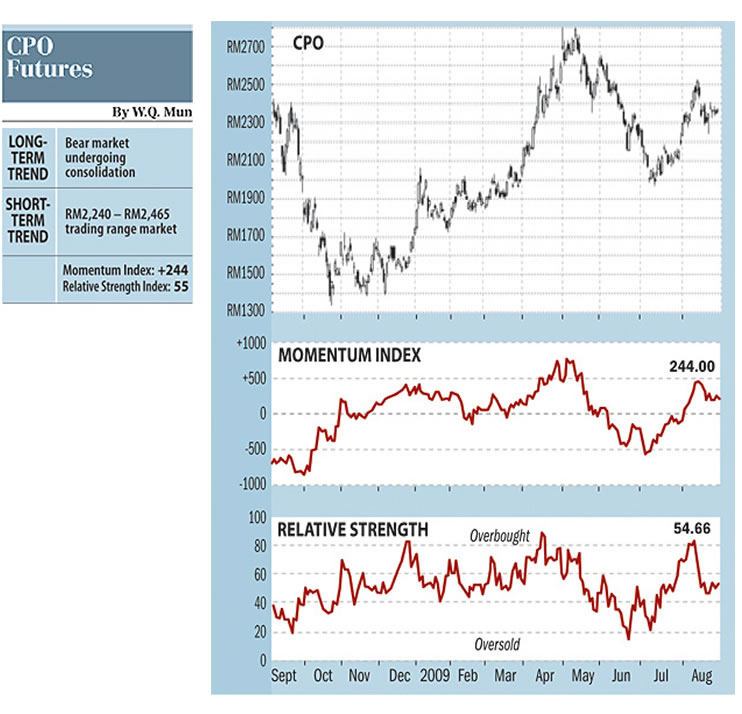 THE BAR AND VOLUME CHART: This is the daily high, low and settlement prices of the most actively traded basis month of the crude palm oil futures contract. Basically, rising prices accompanied by rising volumes would indicate a bull market. THE MOMENTUM INDEX: This line plots the short/medium-term direction of the market and may be interpreted as follows: (a) The market is in an upward direction when the line closes above the neutral straight line and is in a downward direction when the reverse is the case. (b) A loss in the momentum of the line (divergence) when prices are still heading up or down normally indicates that the market could expect a technical correction or a reversal in the near future. THE RELATIVE STRENGTH INDEX:
This indicator is most useful when plotted in conjunction with a daily bar chart and may be interpreted as follows: (a) Overbought and oversold positions are indicated when the index goes above or below the upper and lower dotted lines. (b) Support and resistance often show up clearly before becoming apparent on the bar chart. (c) Divergence between the index and price action on the chart is a very strong indication that a market turning point is imminent. The subject expressed above is based purely on technical analysis and opinions of the writer. It is not a solicitation to buy or sell. Source : Business Times