OBSERVATIONS: Depressed by the prospect of lower foreign demand

for palm oil, due to the narrowing of the palm oil-soyabean oil

five-month lows under US$72 a barrel.

contract broke through on the downside the erstwhile RM2,470 a tonne

per cent, over the week

Reacting to scintillating May 1–10

end-April 2010, this market made attempts at rallies in early trade last

week. But those early rallies fizzled out as the palm oil-soya-bean oil

discount narrowed to 9 per cent (the norm is 15 per cent).

strengthening of the Malaysian unit against the US dollar; it serves to

Soyabean oil is the world’s No. 1 edible oil in terms of consumption but

palm oil is the world’s No. 1 oil in terms of world trade in oils and

fats. At the start of last week the ringgit was being swapped

at around RM3.28 to a US dollar in forex markets. But it quickly

basis point increase in the Overnight Policy Rate to 2.50 per cent.

The Malaysian unit closed last week just above RM3.20 to a US dollar, a

gain of some 2.4 per cent against the greenback in the course of one

week.Conclusion: Last week’s breakdown below the

price plane in the present phase of the bear market.Next 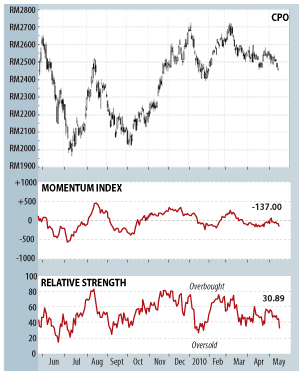 HOW TO USE THE

market. THE MOMENTUM INDEX: This line plots the

follows: (a) The market is in an upward direction when the line

when the reverse is the case.(b) A loss in the momentum of the line

the near future.
THE RELATIVE STRENGTH INDEX: This indicator is

be interpreted as follows: (a) Overbought and oversold positions

dotted lines. (b) Support and resistance often show up clearly

before becoming apparent on the bar chart. (c) Divergence between

a market turning point is imminent. The subject expressed

It is not a solicitation to buy or sell.Source: Business Times by W.Q.Mun