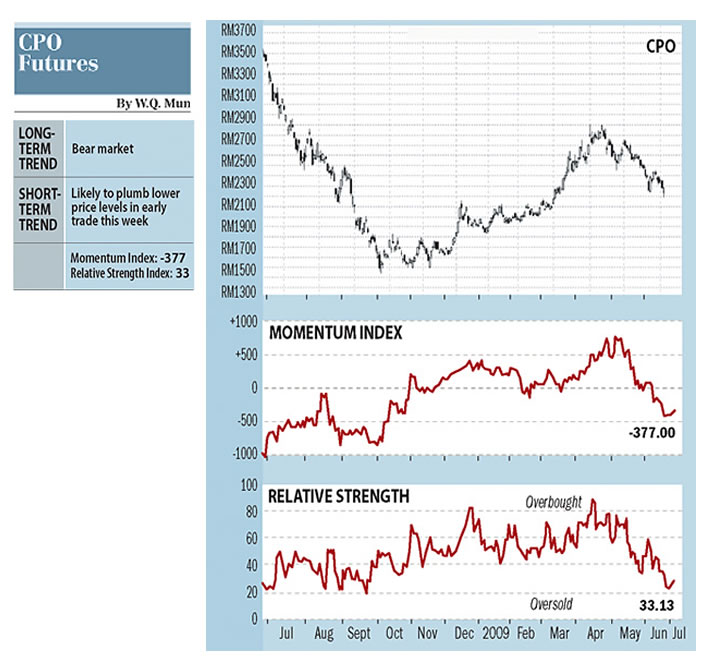 OBSERVATIONS: Swept down by a torrent of bearish news and adverse developments, the Kuala Lumpur CPO futures market fell to a 13-week low last week. The actively-traded September 2009 contract settled last Friday at RM2,175 a tonne, down RM142, or 6.13 per cent, over the week.

And because there probably will be more bad news ahead, this market will likely plumb lower depths in the near- to short-term future.

For one thing industry and market players believe the fundamentals for the crop will deteriorate further. More to the point they expect palm oil stocks to start piling up again.

In the present high production season, poor foreign demand for palm oil will exacerbate the stock situation. The June export estimates by export monitors Societe Generale de Surveillance and Intertek Technical Services, which amounted to a total combined average of 1.23 million tonnes, indicate that export sales are either falling or have stagnated due to poor foreign demand.

And the drying up in export sales is happening just when beneficial rains have started falling in Peninsular Malaysia, helping to boost fresh fruit bunch production after the past few months of dry scorching temperatures,

For another thing, reports of beneficial rains and good weather conditions for the growth of so-yabeans, both in the US and India, are depressing the bellwether US soyabean oil futures market, with a adverse knock-on effect on the local market. Indeed, speculation that India, with an abundant supply of edible oil stocks, will soon raise import duty on palm oil is another dampener on investor sentiment.

Conclusion: This market will be on tenterhooks ahead of the Malaysian Palm Oil Board report on June trade data and end-June palm oil stocks, due out this Friday.

The technicals suggest that this market is likely to plumb lower price depths in early trade this week, before it becomes primed for a technical bounce. HOW TO USE THE CHARTS AND INDICATORS

THE BAR AND VOLUME CHART: This is the daily high, low and settlement prices of the most actively traded basis month of the crude palm oil futures contract. Basically, rising prices accompanied by rising volumes would indicate a bull market. THE MOMENTUM INDEX: This line plots the short/medium-term direction of the market and may be interpreted as follows: (a) The market is in an upward direction when the line closes above the neutral straight line and is in a downward direction when the reverse is the case. (b) A loss in the momentum of the line (divergence) when prices are still heading up or down normally indicates that the market could expect a technical correction or a reversal in the near future. THE RELATIVE STRENGTH INDEX: This indicator is most useful when plotted in conjunction with a daily bar chart and may be interpreted as follows: (a) Overbought and oversold positions are indicated when the index goes above or below the upper and lower dotted lines. (b) Support and resistance often show up clearly before becoming apparent on the bar chart. (c) Divergence between the index and price action on the chart is a very strong indication that a market turning point is imminent. The subject expressed above is based purely on technical analysis and opinions of the writer. It is not a solicitation to buy or sell. Source : Business Times