OBSERVATIONS: The Kuala Lumpur CPO futures market has in the

recent past acquired the habit of playing follow-the-leader. Major world

stock and commodity markets were the leaders, sometimes playinjg their

It was no different last week. The local

market went on a roller-coaster ride, falling at first in tandem with

the meltdown in major stock markets, crude oil and gold, then rising in 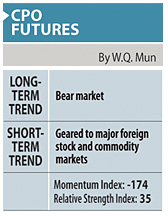 And it is likely to play follow-the-leader again this

week, though the leader this time round might well be the grain complex –

in particular the soyabean and soyabean oil markets.

and crude oil’s plunge to US$71 a barrel. And its bounce back up above

the psychological RM2,300 level in late trade was also in tandem with

the bounces in those major markets. The actively-traded September 2010

per cent over the week despite the late uptick.

end-June 2010 stocks should be public knowledge today, though the volume

indicators suggest market players in general – and the smart money in

What could sway the US soyabean

likely to be be 2 per cent lower than earlier expectations, due to

That report had a noticeable effect on US

earlier losses but also ended last week at 37.50 US cents a pound, up

were up over the week..

But the local market has yet to play

market is likely to trade with a steady, if not stronger, tone, in early 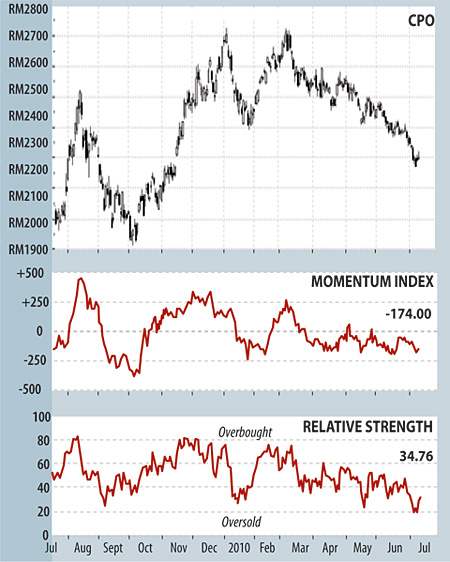 # THE BAR AND VOLUME CHART: This is the daily high, low and

goes above or below the upper and lower dotted lines.

Support and resistance often show up clearly before becoming apparent on

(c) Divergence between the index and price