OBSERVATIONS: Wary over analysts’ estimates that end-November 2009 stocks of palm oil would pile up to a high for the year of 2.03 million tonnes, Kuala Lumpur CPO futures market players played safe by liquidating long (buy) positions in numbers, nailing down profits ahead of the much-anticipated Malaysian Palm Oil Board (MPOB) report on November trade data, unveiled last Thursday.

Significant liquidation of long positions was evidenced by the notable fall of the total open interest position to 85,822 open contracts from the previous week’s 90,022 open contracts, a contraction of 4,200 open contracts or 4.67 per cent over the week. As a result the actively-traded February 2010 contract fell to close last Friday at RM2,530 a tonne, down RM32, or 1.25 per cent, over the week.

The MPOB report, in the event, proved a non-event. End-November 2009 stocks were figured at 1,934,613 tonnes, lower by some 40,000 tonnes or 2.02 per cent, from that at the end of the previous month. It could have been a relief to some that the stock position was much lower than the expected 2.03 million tonnes. But it was a disappointment in that the report offered no leads for meaningful trade.

Weakness in foreign commodity markets, due to a strengthening of the US dollar, also was a depressant factor. The bellwether USsoyabean oil futures January 2010 contract settled last week at 39.45 US cents a pound, down 18 points or 0.45 per cent. And crude oil for January 2010 delivery dropped below the psychological US$70 (US$1 = RM3.40) a barrel level, settling at US$69.87.

Conclusion: This market, now in the midst of a short-term cyclical downturn, is likely to head lower in early trade this week, but within narrow ranges due a lack of firm leads.

THE MOMENTUM INDEX: This line plots the short/medium-term direction of the market and may be interpreted as follows:
(a) The market is in an upward direction when the line closes above the neutral straight line and is in a downward direction when the reverse is the case.
(b) A loss in the momentum of the line (divergence) when prices are still heading up or down normally  indicates that the market could expect a technical correction or a reversal in the near future. THE RELATIVE STRENGTH INDEX: This indicator is most useful when plotted in conjunction with a daily bar chart and may be interpreted as follows:
(a) Overbought and oversold positions are indicated when the index goes above or below the upper and  lower dotted lines.
(b) Support and resistance often show up clearly before becoming apparent on the bar chart.
(c) Divergence between the index and price action on the chart is a very strong indication that a market turning point is imminent. 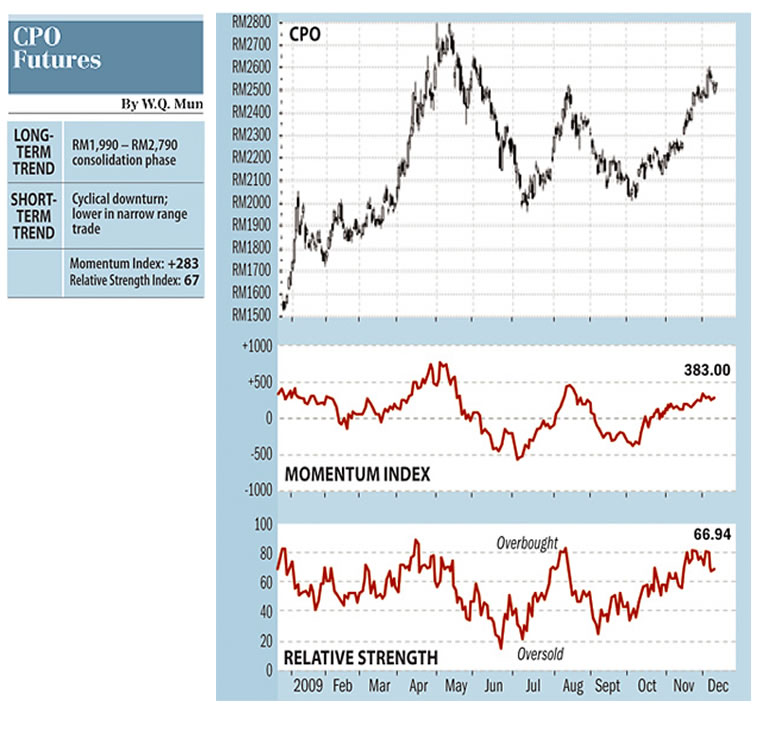