CPO Futures Rebound May Be Shortlived

to eight-month lows as per the Reuters Jeffries CRB Index. Palm oil

was saved from falling to fresh three-month lows. But that bit of

respite may not last.

tied to the fate of the euro than to any other factor. And palm oil is 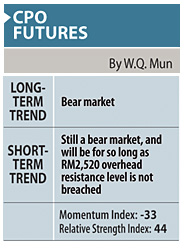 four-year lows of around US$1.21 to a euro. That was before Chinese

dumping euros and eurobonds from its US$2.5 trillion foreign currency

The Chinese announcement not only raised the euro-US

dollar exchange rate above US$1.23, it also lifted some of the gloom in

Crude oil for July delivery fell at first to a low of US$69.21 a barrel

before staging a late rally to touch a high of US$75.72, closing the

week at US$73.97on the heels of the Chinese euro-support news. And palm

oil for August delivery on the Kuala Lumpur CPO futures market, which

had earlier dropped to an intra-week low of RM2,436, recovered some to

per cent over the week (last Friday was a festive holiday).

direction and fluctuations in major commodity markets. That’s because

The European Union is the

largest customer for palm oil, after China and the Indian sub-continent.

effect on this market’s late rally last week is moot.

per cent compared with that for the similar period in April.

This market is still technically a bear.

This market could rise

further in in early trade this week, on follow- through buying interest

and the better tone in world commodity markets.

But so long as

the RM2,520 immediate overhead resistance level is not decisively

breached, it is likely that any price uptick from here will fizzle out 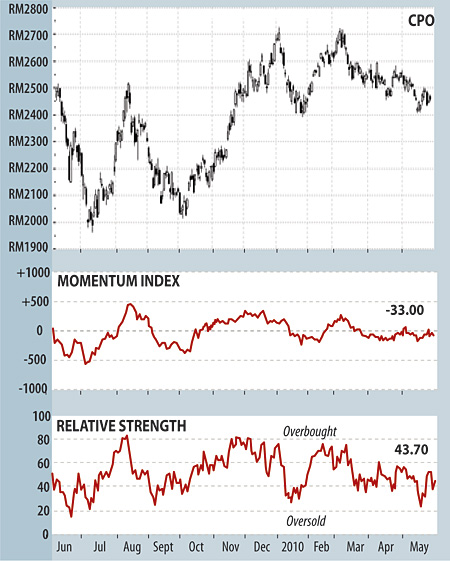 n THE BAR AND

n THE MOMENTUM INDEX: This line