Jolted by by the jump of crude oil above US$71 a barrel, and the rally in world commodity markets overall the Kuala Lumpur futures market shot up to a seven-week high above RM2,300 a tonne last week.

World equity markets also joined the party, roaring up to their highest levels of the year – New York’s S&P 500 index leapt above 1,000 for the first time since early November 2008 – as more and more investors warmed to the idea that the much-ballyhooed green shoots are not only for real but that even more green shoots are spouting. One key driver in crude oil’s rise to within a whisker of US$72 a barrel was the US Institute for Supply Managements manufacturing index, which rose in July to an 11-month high of 48.9. Readings above 50 signal an expansion; below 50, a contraction. The index hit a low of 32.9 in December 2008. Moreover, the index’s new orders component, an indicator of future demand, rose to 55.3 in July from 49.2 in June.

Another driver was the better-than-expected profits at some of Europe’s biggest banks, all of which, say some economic pundits, add to the growing body of evidence that the worst recession in decades may soon be over.

Dorab Mistry, director of Godrej International Ltd, reportedly said at the Malaysia-Turkey Palm Oil Trade Fair & Seminar in Istanbul last week, that palm oil might rise to RM3,000 by mid-August due to a current supply shortage. Whether Mistry’s prediction had an effect on the local market is moot.

Conclusion: This market’s direction is still dependent on extraneous factors.

The Malaysian Palm Oil Board report on July trade data and end-July 2009 stocks, due out today, could have an effect on market sentiment. 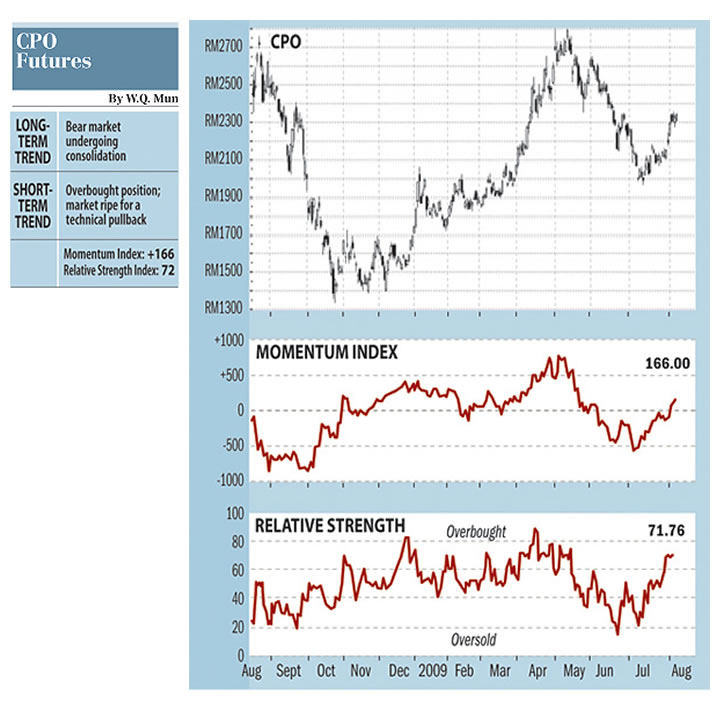 THE BAR AND VOLUME CHART: This is the daily high, low and settlement prices of the most actively traded basis month of the crude palm oil futures contract. Basically, rising prices accompanied by rising volumes would indicate a bull market. THE MOMENTUM INDEX: This line plots the short/medium-term direction of the market and may be interpreted as follows: (a) The market is in an upward direction when the line closes above the neutral straight line and is in a downward direction when the reverse is the case. (b) A loss in the momentum of the line (divergence) when prices are still heading up or down normally indicates that the market could expect a technical correction or a reversal in the near future. THE RELATIVE STRENGTH INDEX: This indicator is most useful when plotted in conjunction with a daily bar chart and may be interpreted as follows: (a) Overbought and oversold positions are indicated when the index goes above or below the upper and lower dotted lines. (b) Support and resistance often show up clearly before becoming apparent on the bar chart. (c) Divergence between the index and price action on the chart is a very strong indication that a market turning point is imminent. The subject expressed above is based purely on technical analysis and opinions of the writer. It is not a solicitation to buy or sell.
Source : Business Times