OBSERVATIONS: The Kuala Lumpur CPO futures market, basis the benchmark December 2009 contract, settled last week at RM2,036 a tonne, down RM150 or 6.86 per cent, and is within striking distance of the RM1,990 a tonne long-term support level. That support level will probably be tested – and demolished – by the end of this week, or at least by next week, if the technicals are any guide.

This market started last week looking like it would extend the previous fortnight’s technical bounce. But poor export estimates threw a spanner into the works, turning a promising start into a selling rout and a technical bounce into a dead-cat bounce.

That prompted market players to turn orderly liquidation of long (buy) contracts into a near selling rout. Many skittish players played safe, rushing for the exits ahead of the weekend.

Another negative factor was Godrej International Ltd director Dorab Mistry’s prognosis, which he let on at a Mumbai conference, that palm oil needs to drop to RM1,900 a tonne in order to stoke buying interest. Mistry had in earlier months predicted that palm oil would rise to RM3,000 a tonne by mid-August which, of course, didn’t happen.

Conclusion: Market players, especially those still holding on to long contracts as of last week, need to brace themselves for an imminent test of – and probable breakdown below – the RM1,990 long term support level. 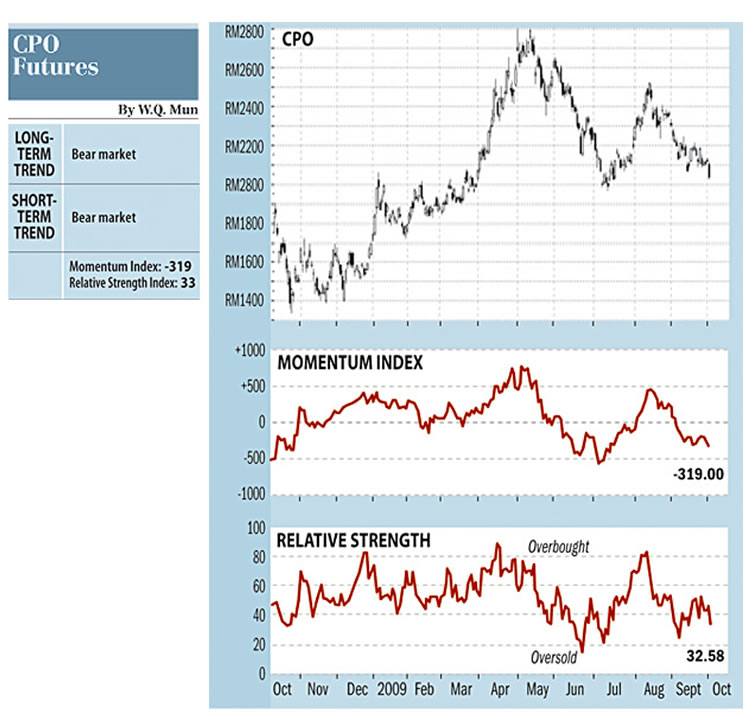