the third consecutive week in a row last week.

The price slide in the past three

weeks, from the recent peak of RM2,722 looks like quite a big fall.

Some players think it’s time for a correction, a technical rebound. 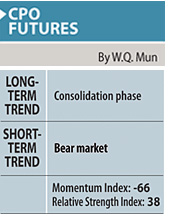 However, with no signs that this market is anywhere near its nadir in

the present bear phase the road ahead still leads south, though it might

be a winding one.

Several factors are weighing this market down.

recent strength in the US dollar, for one, was a depressant for all

Weakness of crude oil, due to big supply buildup pressures

But what really pushed

1-25 export estimates for the commodity amounted to an average of 1.12

million tonnes, or some 24,000 tonnes above that exported in the

The industry expects a pickup in production

in March, which does not bode well for hopes for much of a decline in

tonne psychological level is the next logical target. 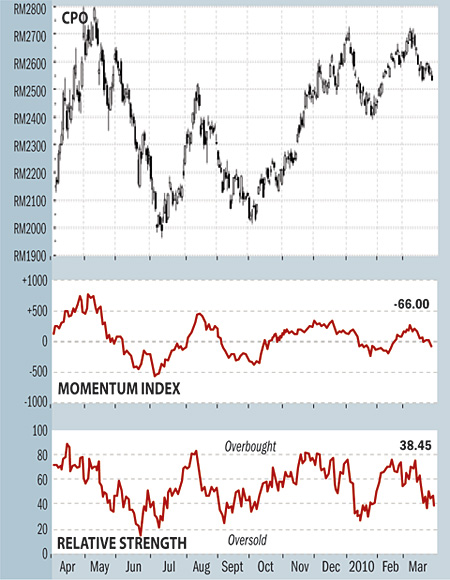 TO USE THE CHARTS AND INDICATORS
THE BAR AND

VOLUME CHART: This is the daily high,  low and settlement prices of the

indicate a bull market.    THE MOMENTUM INDEX: This line plots the

follows:  (a) The market is in an upward direction when the line

when the reverse is the case.  (b) A loss in the momentum of the

reversal in the near future.THE RELATIVE STRENGTH INDEX: This

chart and may be interpreted as follows:  (a) Overbought and

up clearly before becoming apparent on the bar chart.  (c)

strong indication that a market turning point is imminent.The

subject expressed above is based purely on technical analysis and

opinions of the writer. It is not a solicitation to buy or sell.Source : Business Times