OBSERVATIONS: The Kuala Lumpur crude palm oil futures market traded within a narrow RM2,500-RM2,570 band last week. But technical indicators suggest this market is poised to stage a breakout above the upper parameter of that trading band. 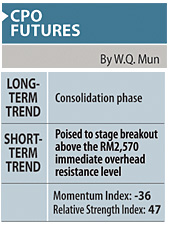 This market swooped in early trade last week to a low of RM2,501, which is as good as having hit the initial target of RM2,500 a tonne, But short-covering soon emerged to lift the market, enabling it to recover all of its earlier losses – and more – before the week was out. The benchmark June 2010 contract settled last Friday at RM2,559, up RM25 over the week.

Prevarication hampered the market from making much headway last week, up or down. That’s because retail players were undecided as to whether the positives outweighed the negatives – or vice-versa.

The one big positive last week was the export estimates for March. Export monitors Societe Generale de Surveillance and Intertek Agri Services put March 2010 exports at a total comibined average of 1.35 million tons, higher than that for February by some 118,000 tonnes or 9.60 per cent, thanks to a bulge in demand from China and India.

The other positive is the biofuel factor: the rise in the price of crude oil to a 18-month high above US$85 a barrel.

The one big negative is industry expectation for a record high South American soyabean harvest.

Conclusion: This market looks poised to stage a breakout above the RM2,570 overhead resistance level. The reason: the substantial 5.88 per cent increase in the total open position to 83,116 open contracts from the previous week’s 78,501 suggests that the smart money – or the people in the know and privy to market sensitive information – have bought a substantial amount of long (buy) positions with, of course, a view to profit. 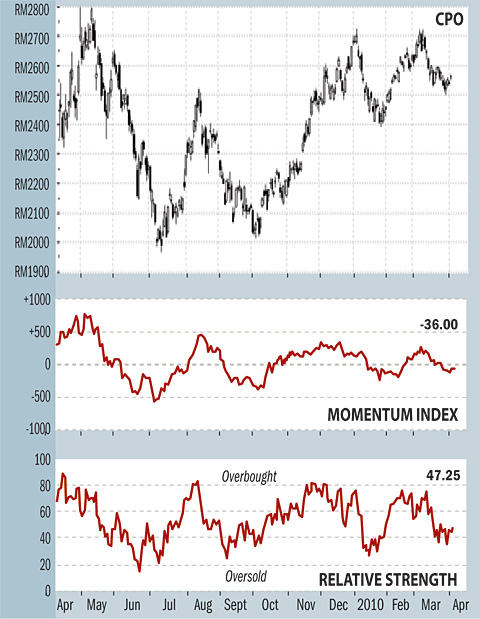 THE BAR AND VOLUME CHART: This is the daily high,  low and settlement prices of the most actively traded basis month of the crude palm oil futures contract.  Basically, rising prices accompanied by rising volumes would indicate a bull market.