last week, thanks to short-covering at the eleventh hour of trade

RM2,425 a tonne, but short-covering emerged soon enough after that to 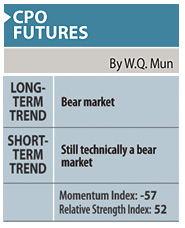 was evidenced by the notable contraction the total open interest

contracts, a disappearance of 1,473 open contracts or 2.08 per cent

The initial bout of short-covering activity was

million tonnes respectively. Compared to their estimates for exports in

end-May palm oil stock position, due out on Thursday.Talk in

some private circles is for a bearish MPOB report, but that was not

This market is still technically a bear. Any technical rally

from here, due to short-covering or otherwise, will still need to break

out on the upside the RM2,520 immediate overhead resistance level before

this market can be said to be back on the short-term bull track. 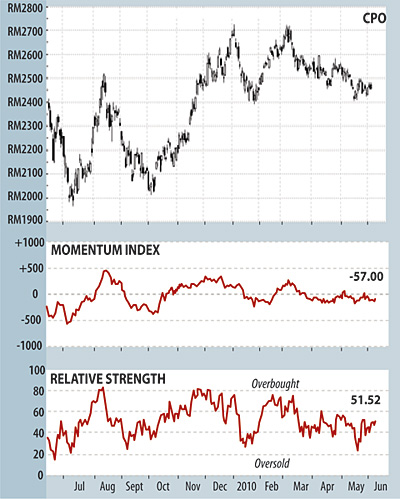 TO USE THE CHARTS AND INDICATORS n THE BAR AND

indicate a bull market. n THE MOMENTUM INDEX: This line

correction or a reversal in the near future. n THE RELATIVE