took some heavy body blows, suffered a severe mauling and, to its

contracts, falling to an intra-week low of RM2,512 a tonne before

week. The reason this market is still considered a bull (technically) is

that it managed to keep its nose above water — the RM2,520 immediate

support level — due to last-minute short-covering. 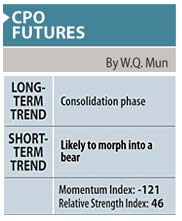 will continue to hold up against the expected — and continuing — barrage

of blows. Its chances, though, look slim to none.

has been labouring under the weight (though this was not readily

apparent) of the strength of the ringgit for more than two months now.

The Malaysian currency, as recently as early February this year, was

trading in forex markets at around RM3.45 to a US dollar. Today, in just

over two months, it has strengthened to around RM3.18, a gain of some

world’s bellwether and No. 1 edible oil in terms of usage. Continuing

ringgit strength also could put a lid on palm oil prices, all other

And it — the uncompetitiveness of palm oil

the CPO futures bull: the crop’s latest — and most disastrously poor —

The latest April 1-15 export estimates from

Services add up to a combined average of some 492,000 tonnes which, not

only is lower than that for first half March by a whopping 162,000

tonnes or 25.0 per cent, but is also the lowest for the first half of

technical indicators overall for continuing as a bull look slim to none.

A decisive breakdown below the RM2,520 immediate support level would

confirm that this market has morphed into a bear. 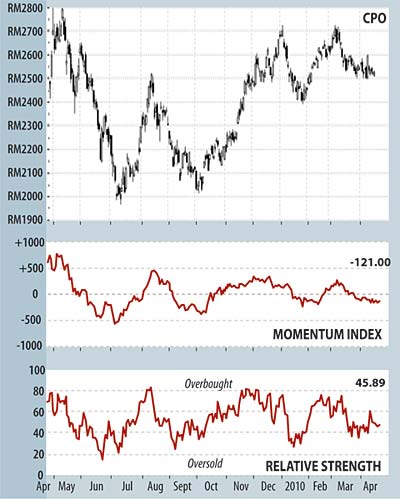 THE CHARTS AND INDICATORS

THE BAR AND VOLUME CHART:

when the reverse is the case.
(b) A loss in the momentum of the line

THE RELATIVE STRENGTH INDEX: This indicator is

be interpreted as follows:
(a) Overbought and oversold positions

dotted lines.
(b) Support and resistance often show up clearly

before becoming apparent on the bar chart.
(c) Divergence between

a market turning point is imminent.

It is not a solicitation to buy or sell.