which is as good as having hit the RM2,400 target. Then, for no good

reason, the benchmark August 2010 contract did an about-turn, surging

This market’s U-turn up the price

chart must have have come as a big surprise to many market participants.

And loud gnashing of teeth for those who, in their rush to cover 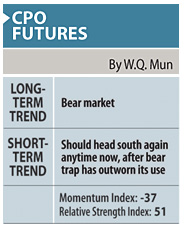 market’s performance was especially surprising, happening as it did in

the midst of last week’s meltdown in world stock and commodity markets.

Germany’s dropping of a regulatory hand grenade in world financial

government bonds and financial institutions, which triggered a flight

from equities and downed commodity markets overall – is the latest cause

Crude oil for June delivery, which had fallen US$20 in less than a

month, slipped below US$70 a barrel. leaving many wondering why the

black goo has undergone such a dramatic price meltdown, despite the

giant oil spill in the Gulf of Mexico.Even gold, the traditional

so-called safe haven in times of economic turmoil, was hammered. The

over the week. And soyabean oil, the chief competitor to palm oil, also

fell, closing last week at 36.96 US cents a pound for July delivery on

week. But palm oil rose, against the global tide in world

that conditions were ripe for squeeze-play on short position holders,

aka ” springing a bear trap”. Readers may recall that, two

weeks back, this column drew attention to “the substantial increase in

bulge or 2,434 open contracts in the course of a single week, while the

tonne” and that “it behooves market players to beware of it”.Though

some commentators attributed palm oil’s strength to the recent

really nothing to shout about. The average of Societe Generale de

higher than that for the similar period in April.Conclusion:

This market is still technically as bear. The immediate

overhead resistance level is RM2,520, the point below which this market 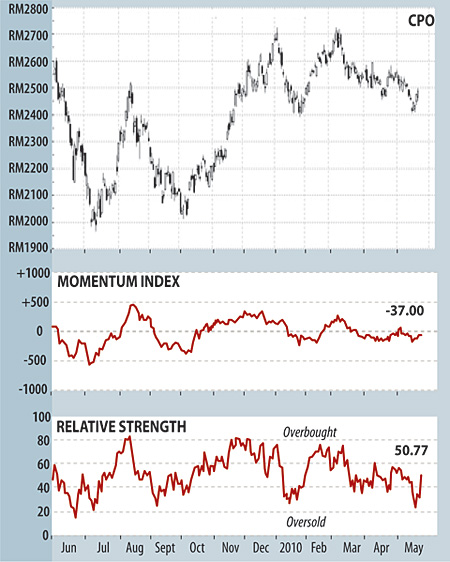 HOW TO USE THE CHARTS

AND INDICATORS n THE BAR AND VOLUME CHART: This is

the daily high, low and settlement prices of the most actively traded

prices accompanied by rising volumes would indicate a bull market.

n THE MOMENTUM INDEX: This line plots the short/medium-term

direction of the market and may be interpreted as follows: (a)

the case.(b) A loss in the momentum of the line (divergence) when

could expect a technical correction or a reversal in the near future.
n

follows: (a) Overbought and oversold positions are indicated when

the index goes above or below the upper and lower dotted lines. (b)

on the bar chart. (c) Divergence between the index and price action