OBSERVATIONS: External factors and events weighed on the Kuala Lumpur CPO futures market at first, but a much improved – indeed, a much better-than-expected – export performance saved the day for the local market.

The actively-traded December 2009 dropped to intra-week low of RM2,089 but strong buying interest emerged at the eleventh hour, giving this market a strong lift. Settling last Friday at RM2,186 a tonne, the benchmark contract closed almost unchanged from the previous week, down a mere RM4 over the week.

Strength in the US dollar early last week was the catalyst that sent crude oil plunging below US$70 a barrel, and which chilled commodity markets overall.

World edible oil markets also came under downside pressure due to expectations for a bumper US soyabean crop. US soyabeans are harvested from October through November and weather conditions are said to be perfect. US soyabean oil for October delivery on the Chicago Board of Trade closed last Friday at 34.68 US cents a pound, down 64 points or 1.85 per cent over the week.

Conclusion: The technical indicators overall, as of last Friday, suggests that the technical rebound is still on. 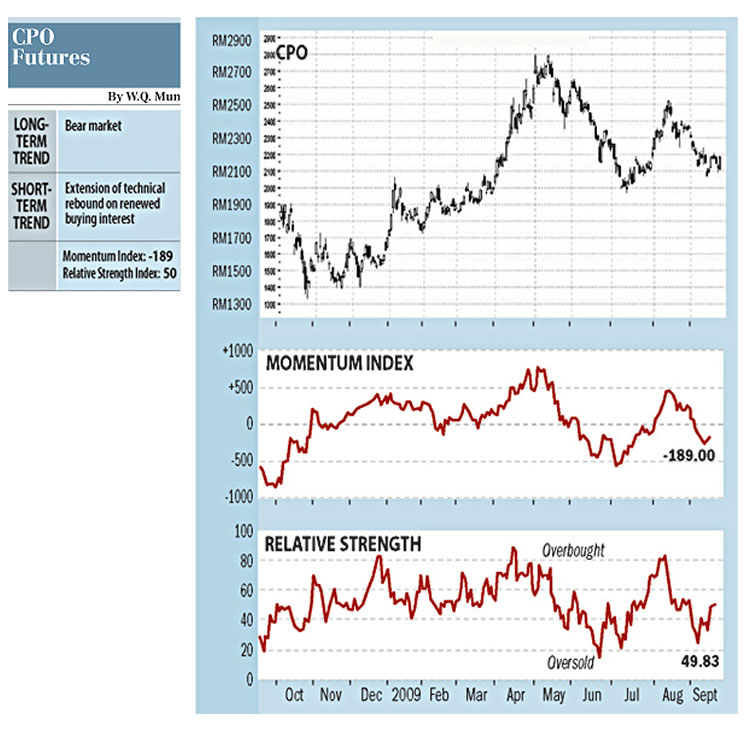