But this bear is not going to make it easy for

market players – not even the bearishly-inclined – to make money.

Indeed, it looks likely that it will be a volatile bear, and therefore

likely higher unpredictable on a near term basis. And there will be

times when, like last week, it could fool some players into thinking 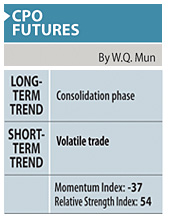 The technical indicators had in the

coming to pass and, in that respect, it was not a disappointment. The

decisive breakdown below the erstwhile RM2,520 a tonne support level in

early trade, and the subsequent plunge to a low of RM2,455, were the

technical signs that the bear had bared its claws.

could well have been a contributing factor, though a minor one, to this

But what was unexpected was this market’s late surge, which not only saw

the actively-traded July 2010 contract recovering all it earlier losses

expected; but not to the extent of topping the previous week’s closing

that palm oil production has been, and will be, badly hit by the blazing

dry weather conditions over the past two months. But that certainly was

not evident from the latest Malaysian Palm Oil Board report, which put

market is technically a bear.

Based on that prognosis last

both. Besides, with the fall in the US soyabean oil futures market last

week, and the exchange rate at RM3.19 to a US dollar, the palm

oil-soybean oil discount has narrowed even further to 8 per cent, thus

This market, however, looks set for bouts of very

volatile trade, with wide and wild price swings the order of the day.

Which could make it highly unpredictable on a near term basis. For those

who can’t the heat, the best advice is: stay out of the kitchen.

THE MOMENTUM INDEX: This line