zone would be money-losing propositions.

that’s the area where, last week, not only many dreams of riches have 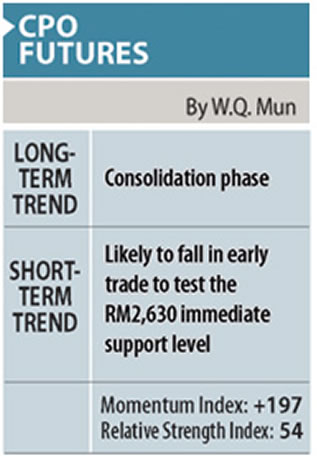 problem was because, try as as it did, this market just could not

it was not for want for trying. This market made passes, for four

consecutive days (Monday through Thursday), above the RM2,700 level.

it made to breach the RM2,725 resistance level.

bulls, exhausted and frustrated by the end of last week, changed tack

last Friday, attempted to nail down profits by liquidating long

contracts and pocketing whatever profits were still available for the

happened is that the RM2,725 overhead resistance level has become even

rallies to stage breakouts above that level.

that overhead resistance were not for want of encouraging news and

compared to that for the corresponding period in February.

Conclusion: This market will, in all probability, fall

in early trade this week to test the RM2,630 immediate support level.

it also will signal the start to a new short-term bear phase. 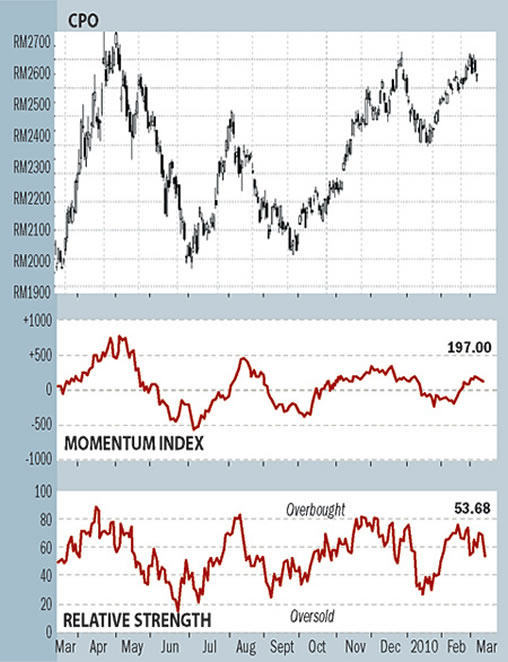 VOLUME CHART: This is the daily high, low and settlement prices of the

Basically, rising prices accompanied by rising volumes would indicate a

when the reverse is the case.
(b) A loss in the momentum of the

reversal in the near future.

(a) Overbought and oversold positions are indicated when

the index goes above or below the upper and lower dotted lines.
(b)

on the bar chart.
(c) Divergence between the index and price action