OBSERVATIONS: The bears had a field day last week, exploiting and profiting from erstwhile bulls running scared due to unexpectedly – and exceptionally – poor export estimates.

The actively-traded November 2009 contract plunged to an intra-week low of RM2,234 a tonne before recovering some on short-covering to settle last Friday at RM2,345 a tonne, down RM96 or 3.93 per cent over the week.

It was the latest – and poor – export estimates that set the ball rolling down the price chart. Export monitors Societe Generale de Surveillance (SGS) and Intertek Technical Services (ITS) put August 1-20 exports at 814,403 tonnes and 815,208 tonnes respectively, down a whopping combined average of some 79,000 tonnes or 8.84 per cent compared to that shipped out in the similar period in July.

The oft-cited RM3,000 a tonne target, which so-called “experts” earlier said would be hit by mid-August 2009, could have spooked some bears into covering their short positions in a big way last Friday. Now, the goalpost for hitting that RM3,000 target has been shifted to “before the end of this year”.

Conclusion: This market is likely to experience volatile trade within RM2,240-RM2,465 price range in the near to short term.

The SGS and ITS’ August 1-25 export estimates, due out tomorrow, will likely have an effect on market tone and direction. 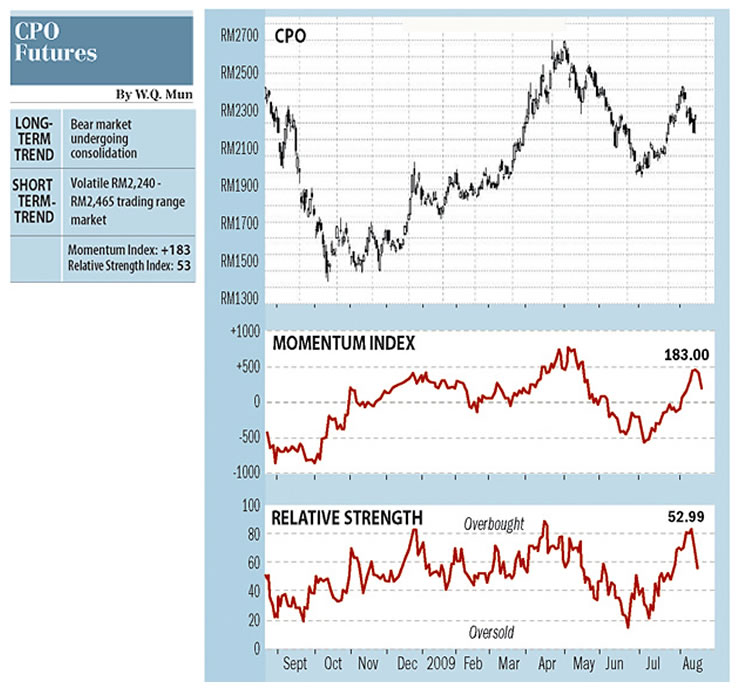