CPO Price Likely to be Below RM2,000/MT for the Rest of the Year 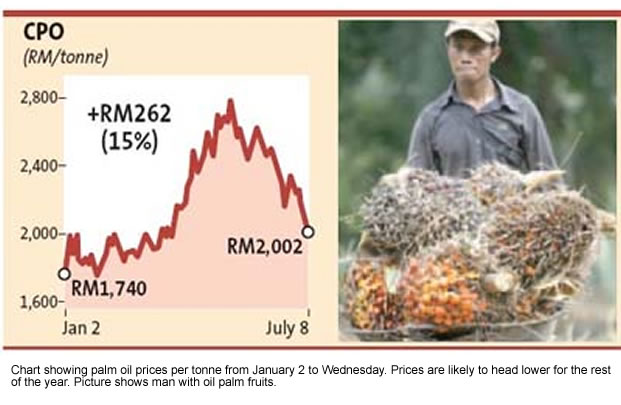 PETALING JAYA: Crude palm oil (CPO) prices might have peaked two months ago and are likely to head lower for the rest of the year on weak industry fundamentals, analysts say. “The market had turned bearish on CPO,’’ said Jeffary Ivan Rosario, a commodity trader at Sunny Futures Sdn Bhd in Kuala Lumpur. “We don’t see strong support for CPO even at these levels.’’ The most active CPO futures contract of Bursa Derivatives, the global benchmark for the vegetable oil, tumbled as much as 4.2% yesterday to a low of RM1,983 a tonne – a level not seen since March 31 – after soyoil price in the United States fell to a three-month low overnight. The CPO futures contract for September delivery settled down RM67 at RM2,002 a tonne yesterday. “We expect crude palm oil prices to trend lower in the second half of the year,’’ a plantation analyst at a local brokerage firm said. He predicted CPO prices would average at RM2,050 a tonne in the third quarter and decline further to RM1,800 per tonne in the last three months of the year. The benchmark CPO futures contract on Bursa Derivatives averaged RM2,190 per tonne during the first half of the year. Sentiment in the edible oil market had turned negative over the past weeks, as speculators liquidated their positions on worries that supply might increase faster than demand in the coming months. “Further weakening (for CPO) could not be ruled out, which may last until next year if demand does not pick up sufficiently to absorb the incremental supply,’’ OSK Research said in a noted dated July 7. CPO plunged 28% from its recent peak of RM2,789 per tonne achieved on May 13. Some analysts considered the fall of more than 20% from the high as a sign that it was in a bear market. Rival soyoil in Chicago was down 19% at US$723 per tonne yesterday compared with its recent high in early June.
Soyoil and palm oil are the top two most consumed edible oils in the world and prices of the commodities often move in tandem although palm oil traditionally trades at a discount to soyoil. A poll by Reuters showed that the market expected local palm oil inventory to increase 4.6% in June as production outpaced exports ahead of official release by the Malaysian Palm Oil Board scheduled for tomorrow. Palm oil stockpile in Malaysia rose for the first time in six months in May after output surged 8.5% – the biggest month-on-month increase in a year. CPO production from Indonesia and Malaysia, the top two palm oil-producing countries that account for 90% of the world’s supplies, was projected to reach a record high this year, government figures showed. This was despite lingering concerns about an abnormal weather pattern known as El Nino, which threatened to wreak havoc in the agricultural sector worldwide this year. Source : The Star by Izwan Idris