Do olive and canola oils perform better than palm oil in terms of health and nutrition?

Do Olive and Canola Oils Perform Better Than Palm Oil in Terms of Health and Nutrition?

The attributes of palm oil in cooking have long been recognised, especially in the preparation of high-heat Malaysian cuisines. As compared to other vegetable oils that are rich in unsaturated fats, palm oil is more resistant to high cooking temperatures and is also less easily degraded as it is stable due to its higher saturated content. This makes meals cooked with palm oil safer because less harmful chemicals can formed as a result of thermal oxidation.

Although there is a monounsaturated fat-rich variety of canola oil (high-oleic canola oil), it is produced using a genetic modification approach. Nonetheless, the performance of these two oils, olive and high-oleic canola oil, is still inferior to palm oil in terms of thermal stability, especially for deep-frying and other culinary applications.

With the intention of providing healthy cuisines, few restaurants nowadays have wrongly switched from palm oil to olive and canola oil in their food preparation. This is due to a lack of knowledge on the health and nutritional advantages of palm oil among the restaurants operators. Numerous clinical research comparing the health effects of palm oil to those of olive and canola oils have shown the similar benefits. Palm oil has been proven as an excellent source of natural vegetable oil, suitable for consumption as part of a healthy, balanced diet. All of these studies were carried out by prominent international research institutes, and the results revealed that a palm oil-rich diet had the same effect on blood cholesterol levels as olive or canola oil. Palm oil was also demonstrated to have no link to the increased risks of heart disease or stroke.

AS EFFECTIVELY AS OLIVE, CANOLA

Palm Oil vs Canola Oil
1995
[Both dietary 18:2 and 16:0 may be required to improve the serum LDL/HDL cholesterol ratio in normocholesterolemic men] 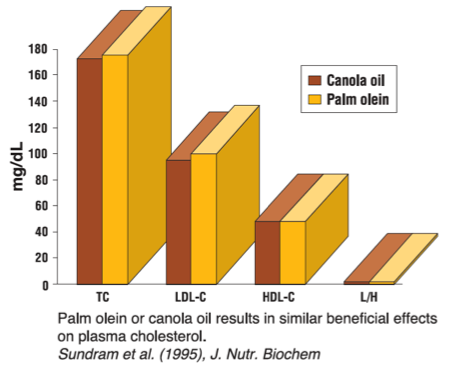 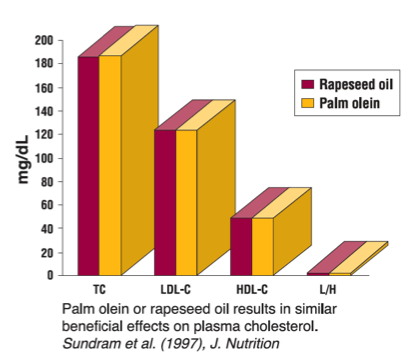 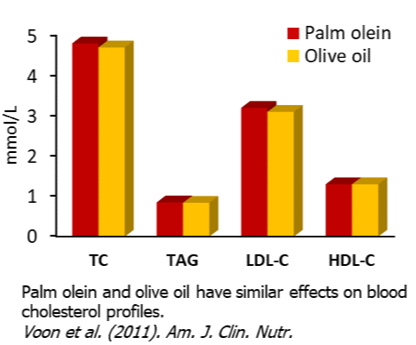 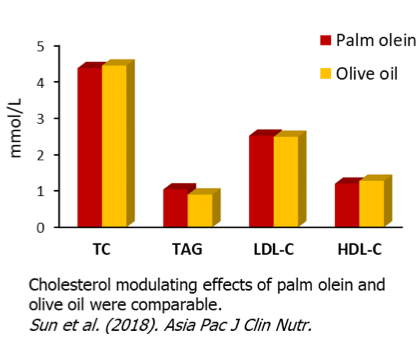 This is attributable to the fact that palm oil contains 40% monounsaturated fat (oleic acid), as well as additional 10% of other unsaturated fats. This naturally balances the fat composition between unsaturated and saturated fats in palm oil. Palm oil is also rich in vitamin E tocotrienols, natural potent antioxidants which are rarely found in food. Furthermore, red palm oil obtained through a special refining technology is high in provitamin A carotenoids. These carotenoids help to support eye health and boost the immune system particularly in children. Red palm oil is ideally used as salad dressing, and for sautéing, as well as baking. 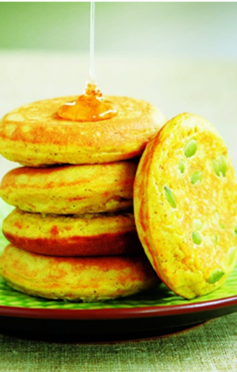 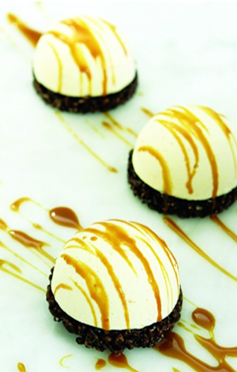 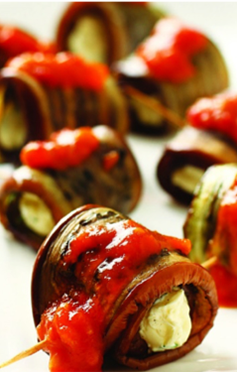 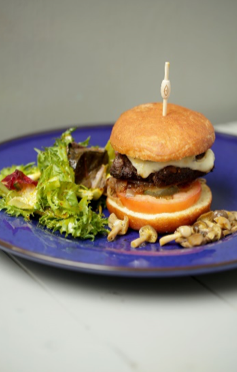 Backed by scientific evidence, it can be concluded that palm oil is a nutritious vegetable oil suitable for consumption as part of a balanced diet and healthy lifestyle. Therefore, there is no reason for the restaurant operators to worry about using palm oil in their cuisines. A healthy menu does not only depend on the type of cooking oil used. Instead, it is crucial to use healthy ingredients such as whole grains, lean protein and vegetables to ensure the meals prepared are well-balanced and nutrient-dense. Nonetheless, portion size of the meals are equally important to make sure the calories does not exceed our energy requirement, as it can lead to weight gain.

In conclusion, palm oil does not result in adverse effects on heart health, when consumed as part of a balanced diet. It is free of cholesterol and trans–fats, apart from being non-Genetically Modified Organism (non-GMO).