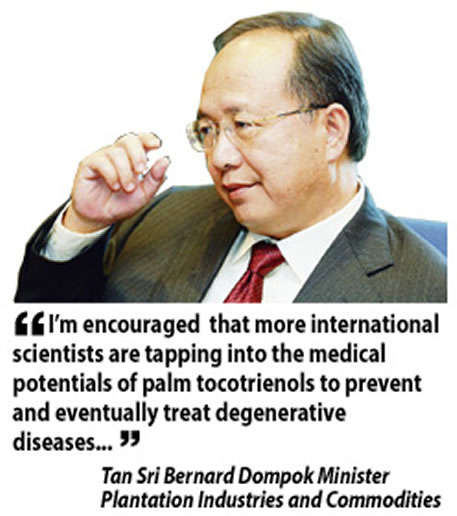 Would you believe that palm oil vitamin E can help prevent death from stroke, heart attack and cancer?

When Plantation Industries and Commodities Minister Tan Sri Bernard Dompok was presented with a set of questions on palm oil vitamin E, he did not think too much of it until he received feedback from scientists at the Malaysian Palm Oil Board (MPOB).

He was pleasantly surprised by the far-reaching potentials of palm oil vitamins, particularly tocotrienols, in preventing stroke, heart ailments and cancer.

In a recent interview with Business Times at his office in Putrajaya, he said he was impressed that palm oil is now increasingly used in medical studies to treat diseases of ageing.

“I’m encouraged that more international scientists are tapping into the medical potentials of palm tocotrienols to prevent and eventually treat degenerative diseases like heart attacks, cancer and stroke,” he said.

Prior to taking office at the Plantation Industries and Commodities Ministry two months ago, Dompok said he had always associated palm oil use only to cooking oil, oleochemicals and biodiesel.

Now that he is briefed on the promising medical benefits of palm oil vitamins, the minister eagerly awaits the results of the clinical trial being carried out at Hospital Kepala Batas by Hovid Bhd, Universiti Sains Malaysia and MPOB.

The clinical trial, conducted by 10 scientists on 328 volunteers, started in January last year.

“We’re now midway into this three-year research, it will conclude in January 2011,” he said.

“This clinical trial is of significance because it is bringing us a step closer in the prevention of cardiovascular diseases.

“It is in the best interest of our nation to see this effort leading to more lives saved,” the minister added.

To gain a deeper insight on the significance of this clinical trial, one has to understand that vitamin E is actually made up of a family of tocopherols and tocotrienols.

In the past 50 years, the bulk of cardiovascular studies carried out in developed countries only focus-ed on the effects of tocophe-rols because of the limited supply of tocotrienols.

Tocopherols is usually found in softoils like soya, canola and sunflower which are grown in cold climate countries while tocotrienols is only found abundantly in palm oil.

The Hospital Kepala Batas clinical trial is seeking to confirm if palm tocotrienols help protect against stroke and cardiovascular diseases.

“If the findings at Hospital Kepala Batas amount to a medical breakthrough and the scientists need more funding to carry out bigger trials, we shall seek the allocation from the Finance Ministry,” Dompok said.

Tocotrienols also demonstrate anti-cancer properties far superior than most other antioxidants. It not only prevents cancer from taking hold but actively blocks its growth and initiates apoptosis – a process where cancerous cells commit suicide.

Tocopherols, the more well-known but lame siblings in the vitamin E family, are not able to induce programmed death in cancer cells. Only the potent tocotrienols have this effect.

Second only to heart disease, breast cancer is the leading killer desease in women today.