The last truly massive El Nino appeared in 1997-98 and ended up causing an estimated $36 billion in destruction and 23,000 deaths around the world. Now, we are on the verge of the similar size event. The waters of the eastern Pacific Ocean are heating up, scientists say, building towards a strong El Niño event that could rival the intensity of the record 1997 event that wreaked weather-related havoc across the globe. Organizations such as National Oceanic and Atmospheric Administration (NOAA), Australia’s Bureau of Meteorology (BOM) and International Research Institute for Climate and Society (IRI) are predicting this El Niño will peak in the late September or early December this year.  If it happens, this will make this year’s El Niño as one of the biggest ever occurrences since 1950.

What are the latest developments of El Niño and are there changes in the indices? How has it affect the palm oil producing regions around Malaysia and Indonesia? What will be the outlook on palm oil price, should El Niño happen?

MPOC would like to invite you to attend our El Niño 2015 Seminar to be held as follows:

Don’t miss this opportunity to get yourself updated on the development of this potential market changing occurrence. Email us to register for the event at iskahar@mpoc.org.my or mhafezh@mpoc.org.my .  Seats are limited so register NOW. 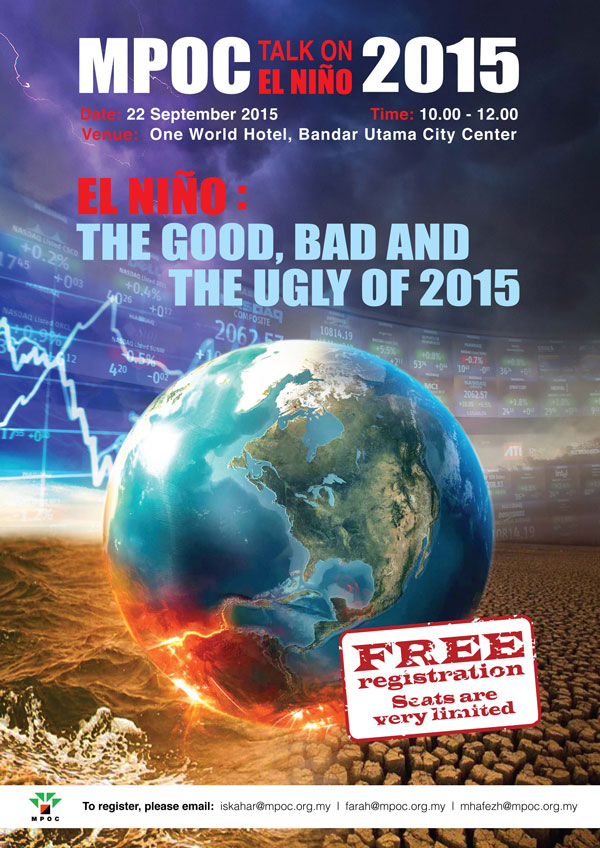