OBSERVATIONS: Speculation over a palm oil supply squeeze and mid-week strength in the US soyabean oil futures bull market were the primary drivers behind the surge in the local Kuala Lumpur CPO futures market last week.

The actively-traded October 2009 contract rocketed to an eight-week high of RM2,521 a tonne in mid-week trade, but profit-taking ahead of the weekend shaved off most the gains. The contract closed last Friday at RM2,411, up RM100, or 4.27 per cent, over the week.

The Malaysian Palm Oil Board (MPOB) report on July trade data and end-July 2009 stocks was positive for investor sentiment. The report put end-July stocks at 1.328 million tonnes, which not only was lower than that at end-June by some 80,000 tonnes, or 5.67 per cent, but also was lower than market expectations of 1.35 million tonnes.

Unseaonally hot and dry weather in past months sparked speculation of an adverse impact on production. But that did not turn out to be the case, with the MPOB figuring July production at 1.49 miilion tons, up 44,000 tonnes to compared with that for June.
The mid-week jump in US soyabeans futures, attributed to strong demand from China, was the catalyst behind the local market’s surge to a eight-week high above the RM2,500 a tonne level. However, buyer enthusiasm in the US soyabean oil futures fizzled out by the end of last week, knocking off one of the underpins for the continued rallly in the local market. US soyabean oil futures August 2009 managed to tack on only 26 points or 0.70 per cent to settle on Friday at 37.18 US cents a pound.

With the palm oil industry now in the middle of the April-through-September high production season, and with US soyabean oil futures on the wane, this market’s continued advent up the price chart will likely hinge on the industry’s current and foreseeable export performance.

Conclusion: The improvement in palm oil’s July 2009 fundamentals was due to strong export demand.

But whether palm oil will continue to enjoy strong foreign demand is uncertain, as evidenced by the latest Societe Generale de Surveillance and Intertek Technical Services’ August 1-10 export estimates, which, at a combined average of 384,000 tonnes, were lower by some 20,000 tonnes or 4.55 per cent compared with the similar period in July.

What market players make of the August 1-15 export estimates, which will be out today, will be a prime determinant of immediate market direction. 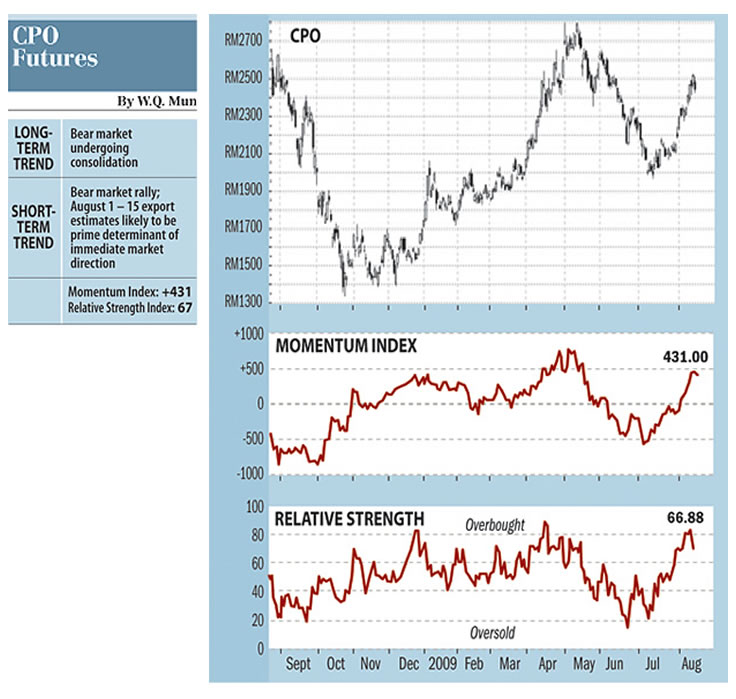