OBSERVATIONS: Lifted by a combination of short-covering and fresh buying interest, the Kuala Lumpur CPO futures benchmark December 2009 contract closed last Friday at RM2,085 a tonne, up RM49 or 2.41 per cent over the week.

The price rise, however, was really nothing to shout about.

Because of market players’ prevarication and the uncertainly over direction, trading for much of the week was done within a narrow RM2,100-RM2,013 a tonne band. This market only managed to do a decent price run-up last Friday.

Still, there was genuine and fresh buying interest, as evidenced by signs of accumulation in the volume complex indicators. And short-covering liquidation of short positions was evidenced by the contraction of the total open interest position by 1,696 open contracts to 93,504 open contracts

The real catalyst behind the market’s rise in price, though, was weakness in the US dollar, which gave world commodity markets overall a strong lift last week. Gold surged to a record high above US$1,050 (US$1 = RM3.39) an ounce and US grain markets were buoyant.

Although palm oil benefited from the knock-on effect of strength in foreign edible oil markets the local market’s relative small price gain could best be described as an uptick, which could be ascribed to caution on the part of market players ahead of the Malaysian Palm Oil Board’s unveiling of its report on September trade data and end-September 2009 stocks, which should be public knowledge today.

However, this market’s – as well as that of world commodity markets overall – immediate price direction will likely continue to hinge the fate of the US dollar, that is, whether the US greenback will see further weakness – or strength – in the near-term future.

Conclusion:Though this market is likely see an extension of last week’s price rise in early trade this week, it needs to stage a decisive breakout above the RM2,130 a tonne short-term overhead resistance level in order to engender investor confidence that what we are seeing are the stirrings of – or the start to – a new bull phase. 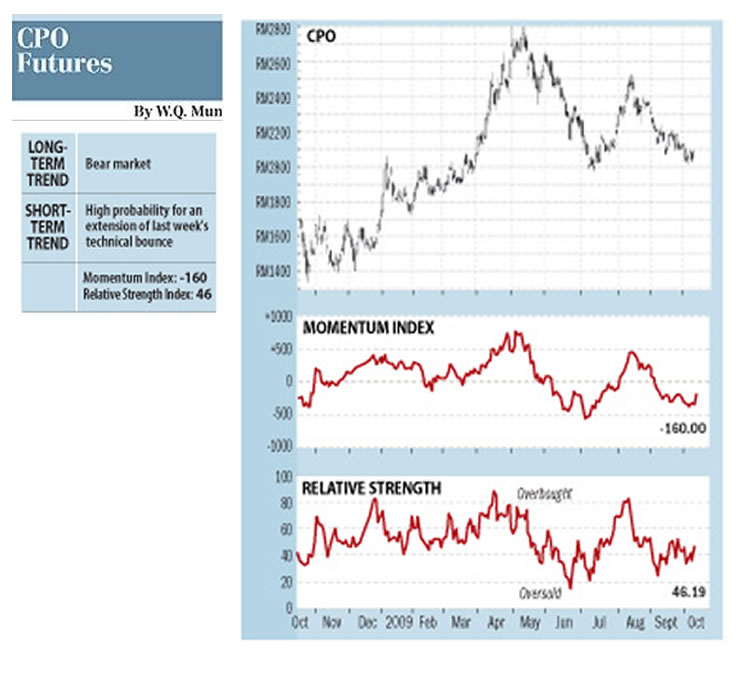