FPI senior general manager (operations) Mokhtar Mat Min said: “It is ideal for a big plantation operator like Felda to fully tap its abundant biomass waste and convert it into renewable green energy, which can also be a new income generating source for the group.”

“Despite our focus to become a dynamic global conglomerate, we recognised the important need to be a socially responsible group practising environmentally friendly methods in every aspect of our operation,” Mokthar told a group of journalists visiting Felda’s biogas plant in Besout and compost plant in Trolak, Perak recently. 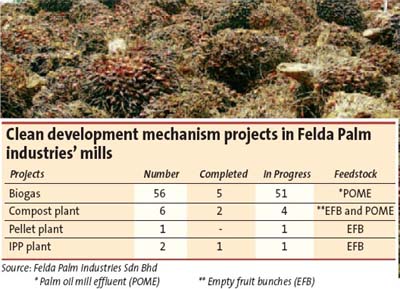 In Malaysia, there seems to be a strong reluctance among some oil palm plantations and palm oil millers to develop CDM projects given their high capital requirements.

According to industry analysts, to register for a CDM project, an operator would have to bear certain costs such as for transaction which could range from RM2mil to RM10mil per project depending on the scale and capacity.

According to Mokthar, Felda’s CDM projects in FPI mills nationwide were progressing well but had different completion dates as their contruction had to undertaken in stages, “given the varied sizes, capacity and capital expenditure.”

Citing the Felda Besout biogas plant, he said: “Some RM3.8mil has been invested and the plant has the capacity to produce 25,000 tonnes of CER which is tradeable in the international market.

“From this venture, Felda expects to generate an additional income of about RM1.1mil per year based on the current carbon-credit international price of US$13 per tonne.”

Felda established its pilot biogas plant at Serting Hilir, Negri Sembilan in 2005. This later led to a commercial operation which optimises the generation of biogas and captures methane to generate up to 500kW of electricity.

The power generation plant is part of the Government’s small renewable energy programme. The “green energy” was channelled to commercial and domestic consumers within the Sahabat Complex and also consumed by Felda’s palm oil refinery within the vicinity.

Mokthar said another Felda plant in Jengka, Pahang, also used about 300,000 tonnes of EFB per year to produce 10 MW of power, which could be sold to the national grid or used by Felda’s existing estates to light up its buildings. The projected CER production is about 50,000 tonnes per year.

As for its compost projects, the first operation was at Maokil mill in Johor in 2005. The plant used EFB and POME to produce organic fertiliser.

Currently, two plants in Sampadi (Sarawak) and Trolak (Perak) are fully operational with an estimated CER of 18,432 and 13,824 tonnes a year respectively. Two more, in Kalabakan (Sabah) and Jerangau (Terengganu), are in the final commissioning stage. Source : The Star by Hanim Adnan