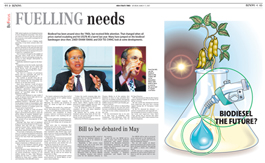 THE initial euphoria over biodiesel seems to have dissipated somewhat. Now there are voices of concern that the new fuel is by no means a sure path to prosperity for its producers.

First, biodiesel is not a finding made yesterday. It has been around since the 1960s.

The only reason why it has not received greater attention in the past decades was that crude oil prices were still at tolerable levels and there was no strong need as yet to look for a substitute fuel.

That scenario changed in the middle of last year when crude oil hit US$78.40 (RM275) a barrel, prompting energy producers to seek cheaper alternatives to generate power.

Suddenly, biodiesel is again in the limelight.

Companies across the world, especially in Malaysia, Europe, the US, Japan and South Korea, have all jumped on the bandwagon by announcing their respective biodiesel plans.

The fuel is a mixture of petroleum diesel and any vegetable oils such as soyabean, rapeseed and palm oil.

The earliest to benefit from the attention given to biodiesel were edible oils. As the outlook for the feedstocks improved, so too did their prices.

Since then, however, crude oil prices have weakened by 25 per cent to above US$60 (RM211) a barrel. Many, including Malaysia’s plantation companies, are now feeling jittery and have either postponed or cancelled plans to build biodiesel facilities.

Experts said biodiesel is only viable if crude oil prices remain high and do not dip below US$60 a barrel.

“However, as long as crude oil prices are at the US$60 per barrel level or higher and feedstock (soyabean, palm oil) prices follow in tandem, biodiesel production will be feasible,” Maxfield said.

Renowned agriculture bank Rabobank has warned of an overcapacity of biodiesel in Asia.

Although less than half of biodiesel projects currently planned are likely to be realised, Asia may still see a surplus capacity of more than 1 million tonnes a year by 2010, analysts Patrick Vizzone and Brady Sidwell told Reuters.

“If you look at Indonesia and Malaysia, there are burgeoning biodiesel industries in both countries,” said Vizzone, regional head of the Asia Food and Agribusiness sector.

“The big question is with no mandatory use, effectively there’s no structural demand in Indonesia or Malaysia just yet.

“With all this biodiesel capacity going in, where is the output going to go?” he questioned.

In the Reuters report, Rabobank said it calculated that by 2010, there would be an annual production capacity of 3.95 million tonnes in Asia, with Malaysia topping the list with 1.5 million tonnes, followed by China with 1 million tonnes and Indonesia with 600,000 tonnes.

The bank’s estimate is less than half of the total capacity of 8.7 million tonnes announced so far.

The total planned capacity for Malaysia, the world’s top producer of palm oil, stood as high as 3 million tonnes.

Indonesia, the world’s No. 2 palm producer, has projects for 2 million tonnes.

At the recent 2007 Palm and Lauric Oils Conference and Exhibition in Kuala Lumpur, however, sentiment among the industry players was anything but jittery.

They were optimistic of biodiesel’s outlook, especially palm oil-based biodiesel, given the ever-rising cost of energy production.

They were also in consensus that biodiesel was here to stay, and that palm oil would be part of that growth.

In Malaysia, the Government has joined the biodiesel race, announcing that it has issued 90 licences. Five plants are already operational, and another five are coming on stream by the year-end.

Plantation Industries and Commodities Minister Datuk Peter Chin Fah Kui also announced that the Biofuel Industrial Act, spelling out rules for the biodiesel industry, will be laid out for debate by lawmakers in May.

The director of London-based Godrej International Ltd, Dorab Mistry, is sanguine about biodiesel.

“Unless the world economy slips into recession, there is room for biodiesel to expand even faster,” he said.

Basing his evaluation on a Goldman Sachs report, Mistry expects crude oil demand to outpace supply this year and to average US$72 (RM253) a barrel.

He believes that in reality, all the biodiesel plants being built all over the world are not quick enough to come on board to meet the demand.

Influential Oil World magazine director Thomas Mielke is of the opinion that biodiesel is here to stay provided that there are no sudden weather disruptions and given a strong biodiesel demand of 10 million tonnes by 2010 and friendly government policies.

“For now, there will be no dismantling of biodiesel plants in the next few years because, scientifically, biodiesel is proven to be able to trim carbon emissions by 80 per cent.

“All the Government has to do now is to find ways to subsidise these companies,” said Malaysian Palm Oil Council chief executive officer Tan Sri Dr Yusof Basiron.

He also noted that bioethanol derived from sugarcane and corn has a strong appeal among the 27 European Union politicians.

In the US, demand for ethanol – a mixture of petroleum and vegetable oil – has prompted farmers to switch to growing corns and sugarcane from other crops, giving rise to worries that other industries may suffer repercussions from this development.