Full B5 Biodiesel Implementation To Be This Year

THE government has decided to revert to the original plan of implementing the B5 mandate this year following a high powered meeting yesterday.

It had initially set January 1 as the deadline to sell B5 biodiesel, a mixture of 5 per cent palm oil and 95 per cent diesel, at all petrol stations nationwide.

Last Friday, there was indication that full implementation could be deferred to next year. 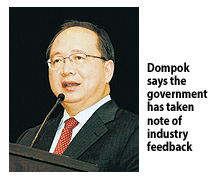 Biodiesel producers, who have invested hundreds of millions of ringgit to cater for captured demand for the renewable fuel, had lamented that the country was at the forefront of palm biodiesel technology but had yet to implement any mandate.

According to the Malaysian Palm Oil Board, biodiesel producers are capable of producing two milllion tonnes of the eco-friendly fuel a year.

Implementation of the B5 mandate will lead to less use of depleting fossil fuel and help the transport sector reduce carbon dioxide emission.

“We take note of the industry’s feedback. Following my meeting with Prime Minister Datuk Seri Najib Razak this (yesterday) morning, we hope to go for the full B5 this year,” Plantation Industries and Commodities Minister Tan Sri Bernard Dompok said.

He said the Cabinet still needed to decide if consumers would have to pay extra for B5. The fuel costs an additional 4-5 sen a litre, which is mainly the cost to transport and blend the mixture.

“Hopefully, we can stick to the B5 blend as the production of biodiesel will take up about 500,000 tonnes of palm oil, which is good given the current high palm oil stock level,” Dompok told reporters after officiating at a seminar in in Subang Jaya, Selangor.

The seminar, titled “Reach & Teach Friends of the Industry: Challenges and Opportunities in 2010”, was organised by the Malaysian Palm Oil Council.

Dompok also plans to present the case of oil palm planters who question the legality of the windfall tax, which is calculated on assumed rather than actual profits.

The planters argued that it would be more justified if the tax was on actual profits of audited financial accounts, like corporate tax.

This is because not every planter makes a lot of money as profits depend on the age and productivity of the trees. A newly replanted estate, for instance, will still lose money even if palm oil prices surpass RM3,000 a tonne.