OBSERVATIONS: The Kuala Lumpur CPO futures market started the first trading day of the lunar Year of the Tiger with a roar on Wednesday. However, it ended the week with a whimper, weighed down by profit-taking ahead of the weekend and investor ambivalence.

Returning last Wednesday well rested after the extended Chinese New Year holidays, market players took the cue from the US soyabean oil futures market’s 111-point or 2.93 per cent overnight leap to 38.98 US cents a pound, basis the March 2010 contract, bidding up the benchmark May 2010 palm oil futures contract to a five-week high of RM2,628 a tonne. However, profit-taking before the weekend trimmed the gains, and the contract settled at RM2,596 a tonne on Friday, still up RMRM16 or 0.62 per cent despite an unexpected first-half February turnaround in export performance. The first half-February export estimates of monitors Societe Generale de Surveillance (SGS) and Intertek Agri Services (IAS) were a letdown. The total combined average of their estimates amounted to 586,367 tonnes, some 70,000 tonnes or 10.60 per cent lower than that shipped out in first half January 2010, an abrupt turnaround from the scintillating export performances that market participants had been used to since the start of this year.

Though the first-half February export estimates fell short of expectations, industry and some market players argued that, because the estimate for production this month is likely 10 per cent lower than that for January, the fundamentals for the commodity should still on balance be more positive than not. True, the industry is in the midst of the October-through-March low production season. And the present blazingly-hot dry weather is likely to adversely affect yields. However, what market participants had least expected was the surprise – and market-depressing – move by the US Federal Reserve last Friday (after the close of local trade) to raise its discount rate 0.25 percentage points to 0.75 per cent, the first time in more than three years, boosting the dollar and potentially crimping overseas demand for US crop supplies. Conclusion: The technicals point to further price weakness in the near-term future. This market could well fall to test the RM2,560 immediate support level. 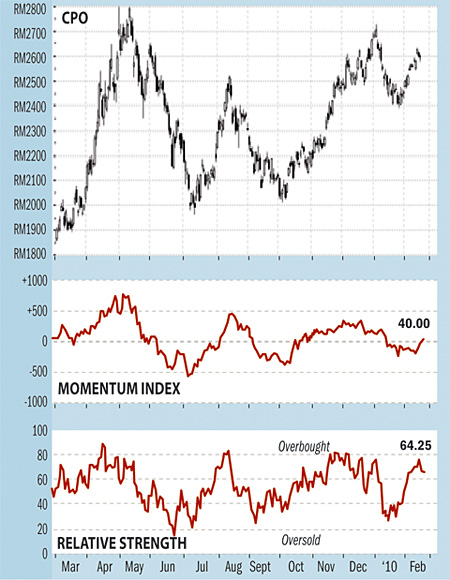 HOW TO USE THE CHARTS AND INDICATORS THE BAR AND VOLUME CHART: This is the daily high, low and settlement prices of the most actively traded basis month of the crude palm oil futures contract. Basically, rising prices accompanied by rising volumes would indicate a bull market. THE MOMENTUM INDEX: This line plots the short/medium-term direction of the market and may be interpreted as follows:
(a) The market is in an upward direction when the line closes above the neutral straight line and is in a downward direction when the reverse is the case.
(b) A loss in the momentum of the line (divergence) when prices are still heading up or down normally indicates that the market could expect a technical correction or a reversal in the near future. THE RELATIVE STRENGTH INDEX: This indicator is most useful when plotted in conjunction with a daily bar chart and may be interpreted as follows:
(a) Overbought and oversold positions are indicated when the index goes above or below the upper and lower dotted lines.
(b) Support and resistance often show up clearly before becoming apparent on the bar chart.
(c) Divergence between the index and price action on the chart is a very strong indication that a market turning point is imminent. The subject expressed above is based purely on technical analysis and opinions of the writer. It is not a solicitation to buy or sell.
]]>
You can share this posts: