The statistics published by industry analyst Oil World ISTA Mielke GmbH (headquartered in Germany) show palm oil imports into Germany to have dropped drastically over the past five years. That contrasts with overall exports of the commodity to the European Union (EU) and thus begs the question: what is going on? This article provides an answer.

The answer to this question depends on who you ask. By all accounts, though, Germany, the EU’s largest economy, is a significant buyer of the golden tropical oil.

However, Germany’s quantities are only a fraction of the amounts that go to the Netherlands, Spain, and Italy. And since 2016, German imports almost halved.

According to numbers compiled by the Malaysian Palm Oil Board (MPOB), the Malaysian share of the total was small in 2019 and fell by almost 40% in 2020.

The picture that emerges when considering intra-EU trade – which can be significant not least because of the Dutch Port of Rotterdam’s role of principal point of entry and redistribution hub – is similar: Germany’s share is surprisingly small.

But how can an economic powerhouse like Germany import not even half the amount of Spain or Italy? Especially when Oil World lists the country as the largest biodiesel producer in the EU?

Thus, even when considering that Germany buys much more palm oil from European suppliers (primarily from the Netherlands) than its peers in the Top 4, the overall drop in imports compared to a few years ago needs an explanation.

As it turns out, the import slump disappears when using numbers the German government works with.

A quick background on that: The German Forum for Sustainable Palm Oil, known by its German acronym FONAP, was established in 2013 as a public-private alliance to promote the use of sustainably produced palm oil. Its steering committee comprises five elected members from industry, NGOs, and the federal government plus one non-elected, permanent representative from the German Ministry of Food and Agriculture (currently Dr. Eva Ursula Müller, Head of the Department of Forests, Sustainability, Renewable Resources).

Since 2013 the FONAP commissions every two years a comprehensive analysis of the palm oil sector in Germany. The environmental consultancy MEO Carbon Solutions prepares the study and the version covering the year 2019 was published on January 20th, 2021.

The data in the report are unique in that they go beyond available statistics that cover direct imports. For those, apart from Oil World, the main source is the German Federal Statistical Office (Destatis). For indirect imports, i.e., palm oil contained in products, the study relies on its own surveys among around 790 market players.

The following graph is decisive. It compares direct palm oil imports as reported by MEO Carbon with those of the industry reference Oil World.

For 2019 the delta between both data sources amounts to no less than almost 440 thousand MT.

That approach leads to vastly different results, and the drop in German palm oil imports, apparent in Oil World figures, turns out to be the opposite. The summary results of the FONAP/MEO Carbon report (abstract in English here) are as follows:

Of the 1.26 million MT consumed, over 1 million MT were sustainably certified (1.044 million MT), which means an overall share of sustainable palm oil in total consumption of 83%. Compared to 2017, this represents an increase of 5 percentage points.

More than half of the palm oil consumed (726,397 MT) was consumed in the energy sector, with the transport sector being the most important segment with a total consumption of 646,000 MT of palm oil.

Background: Why is Germany (and Europe) so keen on sustainable palm oil? The age of (Green) politics

The cradle of European environmentalism stood in Germany. The very political term “green” harks back to the formation of the German Green Party in 1980. Today, the Greens are active the world over: from the Egyptian Green Party to the Partido Verde in Brazil, from the Australian Greens to the Papua New Guinea Greens Party. What they all have in common is a desire to build an ecologically sustainable society. In Germany, the Greens have triumphed in election after election in recent years. Although governing on the federal level has thus far proved elusive, a ruling coalition with the Christian Democrats under a Green chancellor is no longer a laughingstock. Already, green politicians sit in most local and in federal parliament, and they are part of the ruling coalitions in 11 of 16 German states. The State Premier of the economic powerhouse Baden Wurttemberg is “a Green”– a first in German politics and considered a blueprint for a federal government by many. Long story short, German politics these days cannot turn a blind eye to green topics. And palm oil features prominently among them. For example, in a formal inquiry of parliament to the executive (“interpellation”) in 2019, the Green Party requested answers from the government under the emblematic heading: “Rainforest in the Tank – Palm Oil Imports to Germany”. Similar attacks come from other political quarters, albeit with motivations that differ from those of the environmentalists. The party “The Left”, the remnant of the former communist party of the German Democratic Republic, in 2018 tabled an interpellation entitled “Palm oil imports and their use in the Federal Republic of Germany”. The far right “Alternative for Germany”, always keen to promote nationalistic projects, for its part inquired in 2020 about the “Health risks from palm oil in food”. They wanted to know why the federal government did not do more to promote the production of “national alternatives” to palm oil like rapeseed and sunflower. “

The following eight graphs show the domestic consumption in Germany of palm oil and palm kernel oil plus the respective shares of sustainable palm oil.

These sectors are covered:

For all eight graphs, the data source is MEO Carbon Solutions 2021.

Three main conclusions can be drawn from the graphs: 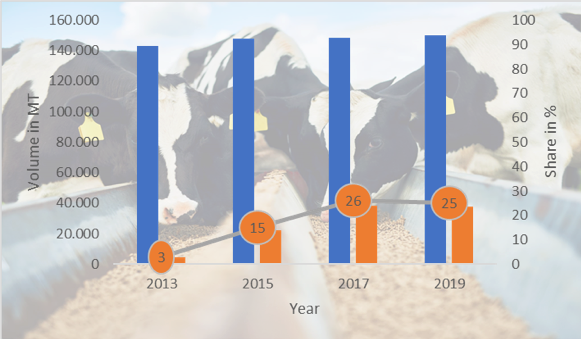 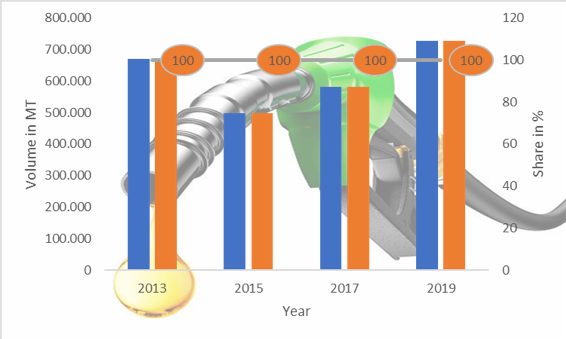 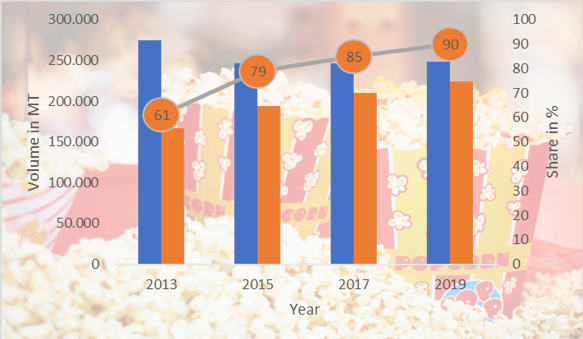 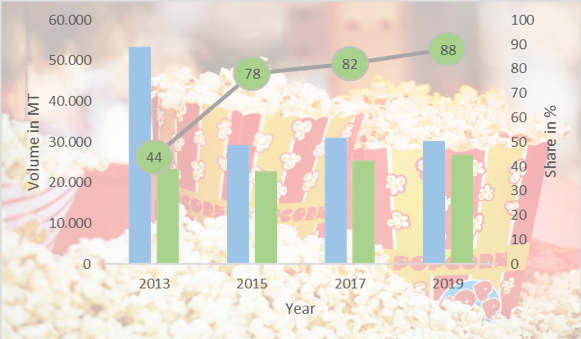 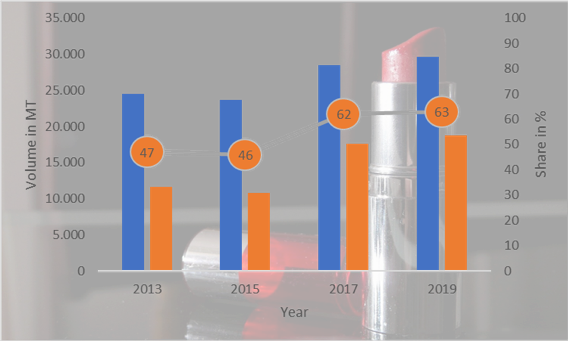 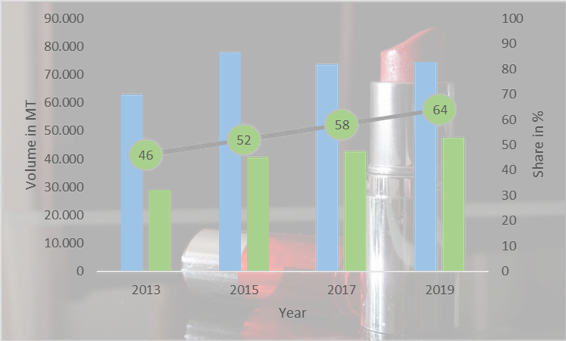 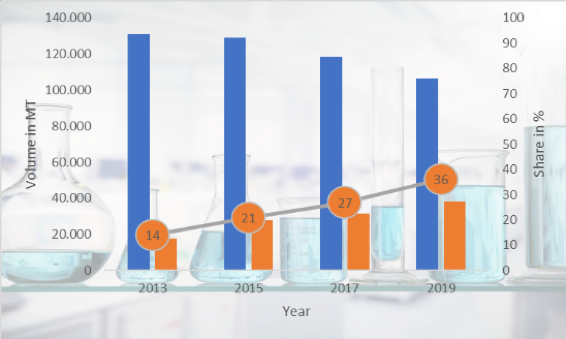 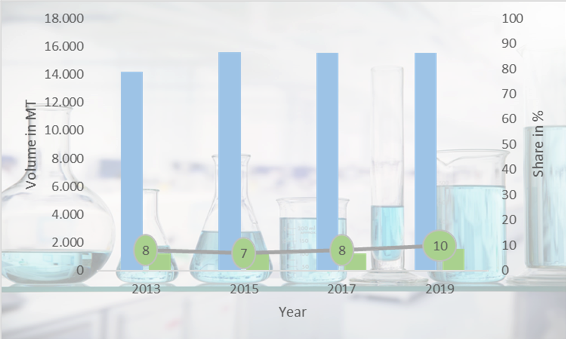 The way forward: which opportunities exist?

The analysis presented in this article paints a drastically different picture compared to simply looking at Oil World figures: a stark drop in 2019 palm oil imports into Germany turns into considerable growth.

The sector-based analysis in the MEO Carbon report also unveils four areas for the Malaysian palm oil industry to focus on in the immediate to foreseeable future.

Thus, it might be worth looking into the organic food market segment. Red palm oil falls into this category. Although quantities necessarily would be comparatively low compared to industrial applications, producers and the Malaysian palm oil industry at large should bear in mind that promoting organic palm oil as a functional health food in the German and European markets will have a considerable positive impact on palm oil’s image overall.