KUALA LUMPUR: The global market has become increasingly dependent on palm oil but major producers like Malaysia and Indonesia are facing tougher operational challenges to cater to the rapidly growing global demand.

Palm oil, which accounts for 57% of world vegetable oils exports, stands to lose its leadership position if Malaysia and Indonesia failed to address the issues amicably, Thomas Mielke, the executive director of ISTA Mielke GmBH, which publishes Oil World, said at the closing of the 22nd Palm and Lauric Oils Conference and Exhibition (POC 2011) organised by Bursa Malaysia yesterday. 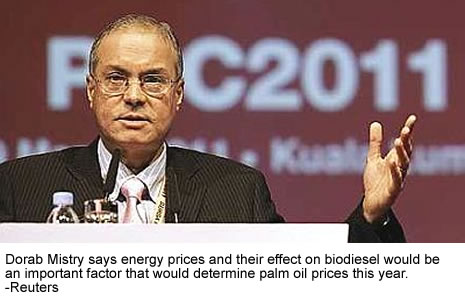 Despite the increasing demand, Mielke said that Indonesia, the world’s largest palm oil producer and exporter, faced a slowdown in acreage expansion in 2009 and 2010 which would curb production in future years.

“This will curb production in years ahead,” he said. “Indonesia will need to boost its oil palm plantings to 350,000ha400,000ha per year to satisfy future world demand.”

World palm oil output posted below-average growth in 2010, increasing by only 500,000 tonnes, he said, adding that La Nina, fertiliser cuts and labour shortage had led to a fall in palm oil stocks while crude palm oil (CPO) futures rose to a near 34-month high of RM3,940 a tonne on Feb 2.

Mielke expects palm oil output and stocks to recover in the short term, thus limiting the downside of low stock and acreage fight.

“Therefore, CPO futures should gradually fall from the current price of above RM3,600 per tonne to an average price of RM2,850 per tonne in October to December 2011,” he said.

Another important point, Mielke said, was that palm oil along with other oilseeds would continue to face increasing global demand from the food, oleochemical and biofuel industries.

“The food versus fuel conflict is becoming more intense, especially with limiting factors like land, water and logistics coming into play,” he said. “There is also a need to source for alternative feedstocks for biodiesel production.”

Prominent palm oil expert, Dorab Mistry, reckons that energy prices and their effect on biodiesel would be an important factor that would determine palm oil prices this year versus last year’s delayed effect of El Nino and the problems related to CPO production.

“Given the high energy prices and extremely tight palm oil stocks as well as the pent-up demand, I expect the current high CPO prices to remain intact for the next eight to 10 weeks.

“During this time, CPO will test new highs. It is conceivable that CPO may test RM4,000 per tonne in the next few weeks,” said Dorab, a director of Godrej International Ltd.

However, he expects a sharp correction by May to June, even though “palm prices will not likely fall below RM3,000 this year unless there is a general financial meltdown and a market collapse”.

Dorab reiterated that the CPO price outlook would hinge on biodiesel demand and production in the second half of 2011, with soy oil setting the pace. Indeed, soy oil’s premium over RBD palm olein could reach an historic high of US$200 a tonne as winter arrives.

LMC International Ltd chairman Dr James Fry, on the other hand, said the global economy held the key to the outlook for CPO and palm kernel oil (PKO) prices.

“As governments raise interest rates and tighten credit to dampen inflation, economic growth will slow down,” he said.

In a hard-landing world economy scenario, Fry said that if crude oil traded at US$70, CPO could be traded at RM2,250 and PKO at RM2,700 a tonne in the fourth quarter of 2011 after a price spike in the second quarter.

A soft-landing scenario, however, would see crude oil gradually down to US$85 with CPO trading at RM2,660 and PKO at RM3,350 per tonne in the fourth quarter.

“While a recovery may be seen in world oilseed production, there were uncertainties in the potential increase of acreage,” she said.

“The bullish factors appear to be supply-related, namely the weather problems in China, the disruption of soybean harvest in South America and stockpiling,” Frick said.

The bearish factors, she added, would be more demand-related in terms of policy changes, stockpile disgorgement and higher prices leading to a cut in overall consumption.