Green Ocean Corp Bhd, formerly known as Online One Bhd, is banking on the new Korea Food and Drug Administration (KFDA) nutrition guidelines, to push sales of its NoveLin cooking oil that doubles up as salad oil.

In the last two decades, the prevalence of overweight children and adolescents has increased by 1.5 times. Experts, concerned that childhood obesity rate is faster there than in western countries, called for mandatory nutrition labelling. 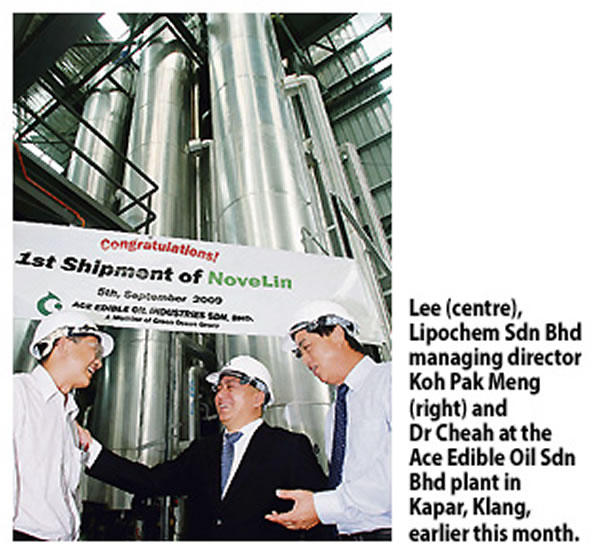 At extreme deepfry heat of 180°C-200°C, harmful oxidised substance like “polar compounds” and trans fat start to accumulate in the oil.

If the oil is not changed with each frying batch, the toxic substance gets absorbed into fried food and eventually end up in our body system.

“With NoveLin, however, restaurateurs can use the oil for three days before the next change,” he told Business Times in an interview.

The scientists also questioned global health authories’ wilful recommendation of large amounts of polyunsaturated fats into the human diet without accompanying measures to ensure the protection of these fatty acids against heat-and oxidative-degradation.

“NoveLin, being of palm oil and softoils, has lower saturated fat content. Considering that this cooking oil blend is all natural, not genetically-modified and free from the deadly trans fat, we’re confident of helping fast food restaurants meet KFDA goals,” Lee said.

“We now have 500 fast food outlets testing NoveLin to make sure the food taste the same,” he said.

Formulated to meet World Health Organisation and American Heart Association recommendations, NoveLin is proven to reduce the risk of cardiovascular diseases because the blend is rich in antioxidants like omega-3 and -6 fatty acids and tocotrienols.

NoveLin also has an extra selling point over other salad oils.

“NoveLin is packed with supervitamin E, which the much-touted heart healthy olive oil does not possess,” Lee said. Tocotrienols or supervitamin E, can reduce cholesterol and has anti-cancer properties.

The group’s ICT business continues to suffer from setbacks and this is reflected in the RM1.59 million loss, a further decline from the RM1.20 million loss a year ago. Lee also attributed the loss to amortisation of its palm kernel crushing plant.

Asked on the group’s outlook for the rest of the financial year, he remains hopeful of NoveLin export revenue to help Green Ocean to break even. Source : Business Times by Ooi Tee Ching