Grumble In The Wrong Jungle

The Observer’s article (Grumble in the Jungle dated 18 June) is a sad misrepresentation of the current state of the palm oil industry and efforts taken to protect wildlife, particularly here in Malaysia.  Mr Phil Hogan had a clearly negative view of the topic, but could not present factual arguments, instead, he resorted to the use of biased language and judgmental words like “havoc” “death” and “deceit”, which make it clear to any critical reader that many of his arguments are flawed.

Firstly Mr Hogan, the “unattractive sounding hydrogenated fats” as mentioned in your article are fast gaining notoriety as unhealthy and undesirable in the human diet. This has raised the need to replace hydrogenated fats with natural solid fats such as palm oil.

With the world population projected to grow from 6.5 billion in 2005 to 8 billion by 2028, demands on all food commodities are expected to strain global land resources. Managing hunger has emerged as a major challenge for all including the FAO and WHO.
Fortunately, the palm oil industry has been meeting the challenge to provide a suitable trans free and sustainable edible oil supply.

The article states that in Indonesia and Malaysia – home to 90 percent of the world’s palm oil and 100 percent of the orang utans – forests have been falling and plantations springing up at a furious pace, especially in the past 10 to 15 years.  Mr Hogan, let’s get the facts right. Today, oil palm plantations occupy only 4.05 million hectares of Malaysia’s land area. Overall ‘green cover’, including untouched forests and agricultural tree crops, occupies a stunning 80% of Malaysia’s land mass of 32.86 million ha. This is far greater than the ‘green cover’ of which most developed economies can boast. Yet, the loudest noise is made by those from nations that have long devastated their own green cover and are actively contributing to global warming by emitting various pollutants from industries and wasteful lifestyles. 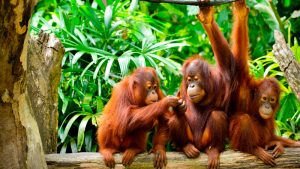 With only 0.4% of the world population, Malaysia produces 11% of the global vegetable oils and accounts for 29% of export trade. This is carried out on 1.84% of the total area of 216 million ha under global oilseed cultivation.  With an average oil yield of 3.66 tonnes/ha/year, other oilseeds pale in comparison (0.4 tonnes/ha/per year for soyoil and 0.6tonnes/ha/per year for rapeseed).

The article further states that millions of tonnes of carbon is released into the atmosphere during the scramble to establish palm oil’s hegemony across the region for bio-fuels. Probably Mr Hogan is unaware that far more energy is spent to generate one unit of bio-fuel energy, besides contributing to more carbon dioxide emission through rapeseed planting. Oil palm’s carbon dioxide absorption/sequestering power amounts to 117 tonnes versus 60 tonnes for the UK’s entire range of agricultural crops.

Furthermore, the 4 million hectares planted with oil palm in Malaysia has released approximately 85 million tonnes of oxygen through photosynthesis annually, more than double that released by the 17 million hectares of agricultural crop in the UK. It should therefore come as no surprise that the oil palm is unsurpassed in its ability to generate oxygen and effectively absorb carbon dioxide for the benefit of world population.

Malaysia takes its commitment to conserve the habitats of the orang utan and other indigenous wildlife seriously. To underscore its seriousness, Malaysia has launched a Palm Oil Wildlife Conservation Fund with an anticipated outlay of RM20 million. For a small country that is a big gesture which your article also failed to mention.

We believe that your readers have the right to accurate, balanced and up-to-date coverage of issues in order to arrive at informed opinions.  We ask that this letter be published as the article may have inadvertently left readers with serious misconceptions in relation to Malaysia, the world’s largest producer and exporter of palm oil.

Lastly, we would be happy to host a visit to enlighten Mr Phil Hogan on Malaysia’s agricultural practices.

REPLY FROM THE OBSERVER

Thank you for your letter to Allan Jenkins of June 23 regarding our magazine article “Grumble in the Jungle”.

While we note all that Dr. Basiron has to say about the practice of palm oil production in Malaysia, Phil Hogan was actually approximately 500 miles south of the Malaysian border iin Indonesian Borneo. I accept that Phil Hogan makes a glancing reference to Malaysia in his second paragraph, but only in relation to the fact that Indonesia and Malaysia are home to 90% of the world’s palm oil and 100% of its orang-utans. Thereafter, his piece concentrates entirely on palm oil production within Indonesia, not Malaysia.


Thank you for taking the trouble to write.