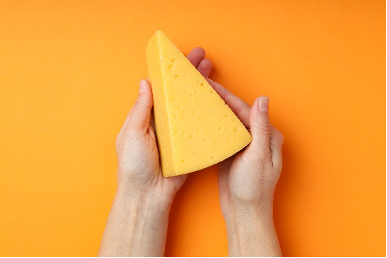 What is cheese analogue?

– A milk cheese alternative that is identical to natural cheese in composition, appearance, features, and even use.

What is the difference between natural cheese and cheese analogue?

– Unlike the usual cheeses, cheese analogues are partially or 100% made from vegetable proteins, fats and oils replacing milk protein and milk fat.

How is cheese analogue produced?

1. Firstly, the vegetable fat component (e.g palm oil) is melted and the temperature is raised up to 70°C.

2. Water is then added to the melted fat followed by fast stirring to form an emulsion.

3. Next, the protein component is slowly added to the mixture to develop the desired texture. Salt, flavour compounds and acid are then added as the drop in pH has a strong effect on texture development.

Why are cheese analogues needed in the food industry?

Fast foods and ready-to-eat conventional meals have grown increasingly popular with cheese as one of the preferential ingredients. Dairy-based cheese is more expensive compared to cheese analogue. Cheese analogue is cost effective compared to natural cheese due to the raw materials used. The use of vegetable oils compared to dairy, the low cost of imported casein and the absence of maturation period resulted in a simpler and cheaper manufacturing processes.

Cheese analogue has a diverse array of functionality (flow ability, melt resistance, shred ability, etc.) which is made possible by customised formulations. During storage, they exhibit high functional stability. Moreover, changes in cheese analogue formulation can be made to substitute certain ingredients to fulfil dietary requirements, such as lactose-free, low calorie, low in cholesterol and even vitamin and mineral-enriched.

Do cheese analogues have similar qualities as dairy-based cheeses?

YES. Both dairy-based cheese and cheese analogue are similar in their nutrient profile, organoleptic attributes and their physical appearance. Nowadays, consumers have become completely conscious of the need for better nutrition. Hence, cheese analogues may offer an excellent opportunity to replace a conventional product with a new one that offers the same or better nutritional and texture characteristics. 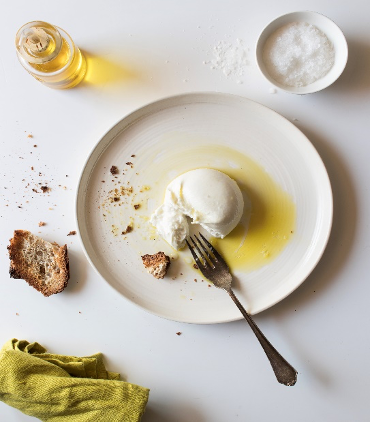 What is palm-based cheese analogue?

In recent years, to alter sensory, nutritional profile and producing a cholesterol free cheese, vegetable oils are commonly used as milk fat replacers in cheese production. In this case, palm oil and its products are used as milk fat replacer in the production of palm-based cheese analogue. Due to its balanced fatty acids contents, and the presence of natural antioxidants such as tocopherols and tocotrienols that are beneficial towards human health, palm oil is widely used as milk fat replacer in conventional cheese products. In addition to that, many studies have reported the use of palm oil and its products in cheese analogue manufacturing has produced an end product that shows comparable organoleptic attributes with natural cheese, but with better nutrient profile and lower cholesterol contents.

Palm oil is widely used in the production of cheese substitutes such as mozzarella, cream cheese and kashar cheese (sliceable semi-hard cheese). According to Karimah et al. (2001), the use of palm oil in the formulation of mozzarella analogue provides functional properties similar to that of dairy-based mozzarella cheese1. Another study found that palm oil can be used in the production of kashar cheese with higher sensorial scores, making palm oil an acceptable alternative for kashar cheese production that can meet market and consumer’s demand without any significant quality loss2. The Malaysian Palm Oil Board (MPOB) has also developed technology to produce palm-based cream cheese analogue that offers functional versatility to the cream cheese analogue, with the end product’s appearance and texture being nearly identical to dairy-based cream cheese, but with an improved nutritional quality3. 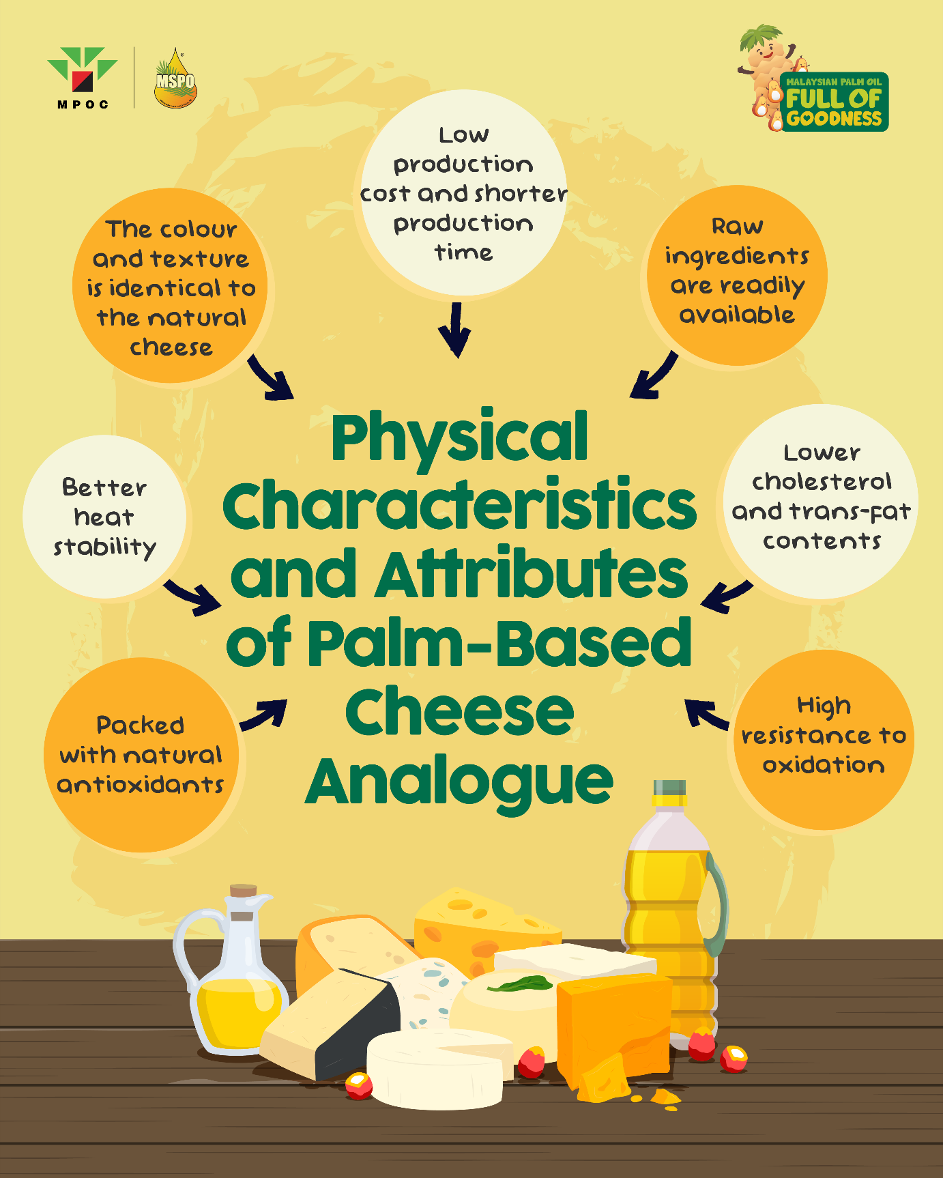 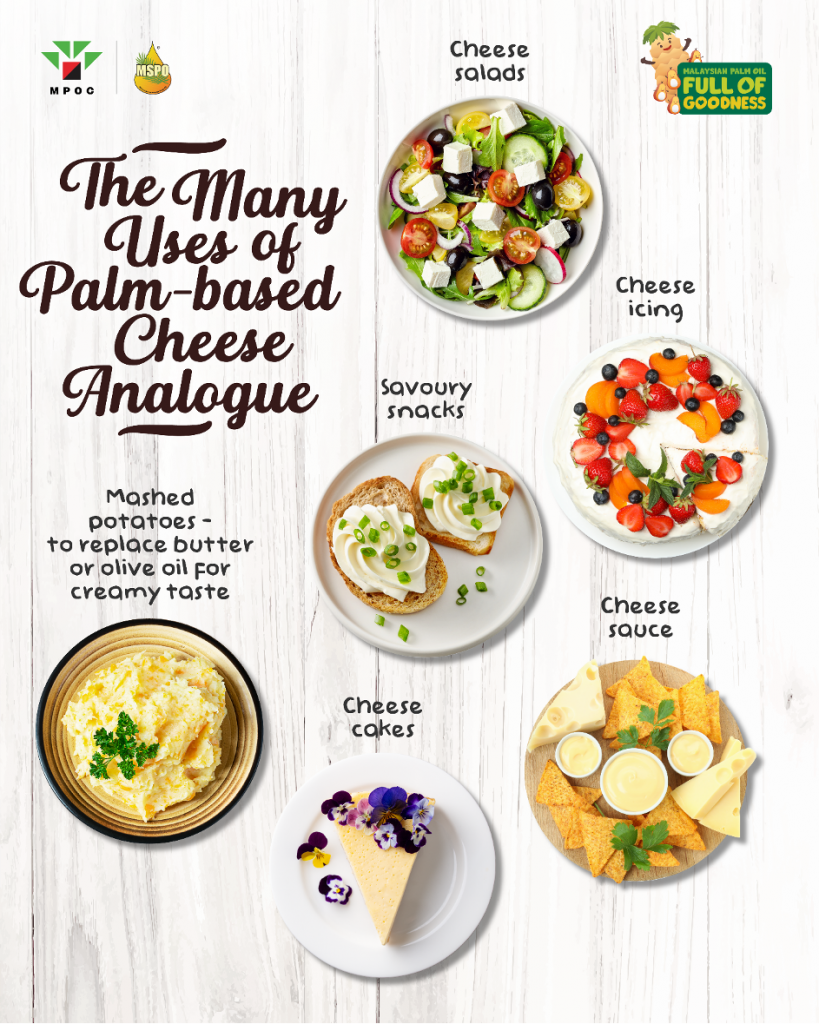