Factors that may curb the uptrend of crude palm oil (CPO) price in the near term could be the release of higher-than-expected October production numbers, improved soya bean planting in South America due to better weather conditions, a stronger US dollar or if China revalues its currency, said plantation analysts.

The January-delivery contract ended at RM3,005 per tonne on the Malaysia Derivatives Exchange yesterday. Palm oil gained more than RM3,000 a tonne for the first time on Thursday in over two years due to speculation that supplies may fall short of growing demand from China and India.

“A bearish factor that may hamper the upward movement in CPO price is next month’s release of the October production numbers. An increase in production numbers may see prices cooling,” a local plantation analyst told StarBiz. 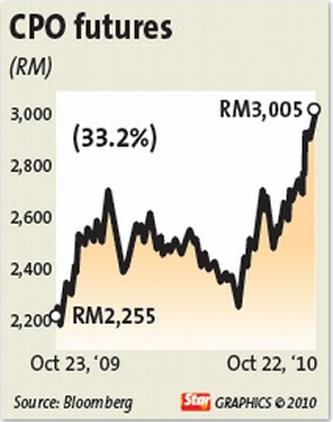 Another local plantation analyst said that the price reversal could take place should there be improved soya bean planting in South America.

“With improved planting, this may mean a higher consumption of soy oil in the place of palm oil,” said the analyst.

This might be the case as weather conditions in the United States and South American countries saw further improvement over the next two months, said the analyst.

The local Plantation Index has also gained momentum from the upside seen in CPO prices. The index, which ended at 7406.79 points yesterday, was at a low of 5880.94 points in May. 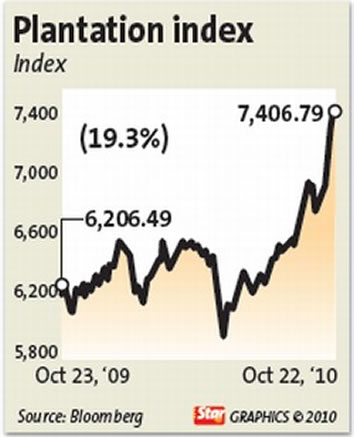 A correlation between the Plantation Index and the price of CPO can be traced, with the price of CPO on the Malaysia Derivatives Exchange on an uptrend since its low in July at RM2,245 per tonne.

“There have been plantation stocks that have largely underperformed but seen improvement since July this year. Whether the plantation index will continue upwards will largely depend on the movement of CPO prices,” said the local analyst.

Meanwhile, analysts added that should the US dollar strengthen, CPO prices would come off.

Commodities, which are priced in the greenback, become less attractive to buyers who use foreign currencies as the dollar strengthens.

“The rise in all soft commodities is more a function of a weaker US dollar rather than the fundamentals of commodities,” said a Singaporean analyst covering the local plantation sector.

He said that another consideration will be the outcome of the G20 meeting this weekend.

“Should China look to revalue its currency, then all bets are off,” he added. China has come under external pressure to increase the value of its currency to alleviate pressure on foreign economies by boosting their exports and reducing trade deficits.

However, analysts expect CPO prices to remain resilient in the medium term.

HwangDBS Vickers Research said in a regional plantation report issued yesterday that firm soy oil prices and a steep drop in fresh fruit bunch (FFB) yield for the first quarter of next year (1Q11) may provide a further boost to CPO prices.

“We expect steeper-than-usual drop in FFB yields and potential delays in South American soybean planting (due to strengthening La Nina) to boost 1Q11 prices,” it said.

HwangDBS expects a strong third quarter for this calendar year on the back of 4% quarter-on-quarter (q-o-q) and 17% year-on-year (y-o-y) increase in average spot CPO prices (to RM2,639) and 14% q-o-q and 3% y-o-y increase in Malaysian CPO production.

“We believe this would be a catalyst for stronger share prices,” it added.