“Big planters have their own replanting schedule.

Since 2008, however, we’ve extended a helping hand to smallholders via the revitalisation programme.

We want to increase our national average oil yield,” she said.
Ipoc collaborates with local commercial banks to facilitate cheaper loans to smallholders to replant their trees. 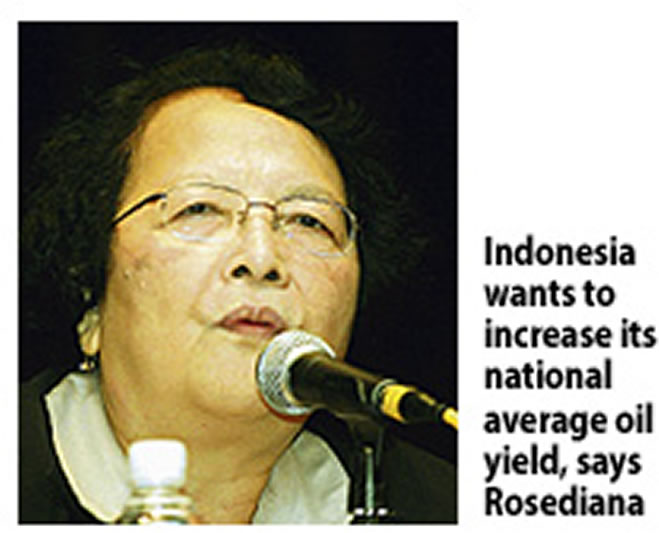 “Some of the Malaysian oil palm investors also have gentlemen agreements to supply high yielding seeds to smallholders within their plasma schemes,” she added.Under the plasma scheme, the Indonesian government requires foreign investors to set aside 20 per cent of land to nurture smallholders in oil palm planting.While not all Malaysian investors are registered with Ipoc, Rosediana estimates that they operate 1.1 million ha of oil palm plantation there.On this year’s palm oil output, Rosediana estimates it to be some 20 million tonnes, rising to 21 million tonnes in 2010, barring the occasional El Nino drought.The United Nations Copenhagen Climate Summit, scheduled to start next month, will see 192 countries meet to set targets on carbon emissions.As heads of states from around the world prepare for the summit, Amsterdam-based Greenpeace stepped up its campaign for a forest moratorium in Indonesia.Without providing data that can be verified, Greenpeace alleged destruction of Indonesia’s peatland forests alone accounts for 4 per cent of global annual emissions and placed the country third biggest polluter, after the US and China.Is Greenpeace really a green group? Does it plant trees?Its 2007 annual report shows it received an annual contribution of e212 million (RM1.07 billion) and the money was spent on propaganda.About e10 million (RM50.7 million) was used for “forest campaign” but not a single cent went to tree planting.It organises theatrical demonstrations and dangerous publicity stunts that sometimes end up causing grevious bodily harm and property damage.In the last few years, Greenpeace’s fleet of ships with fancy names like “Rainbow Warrior” and “Esperanza” have terrorised palm oil tankers at seaports in Indonesia and New Zealand.As the Copenhagen Summit draws near, it has become apparent that Greenpeace, Wetlands International, Friends of the Earth (FOE) and World Wide Fund For Nature (WWF) are political extensions of the ruling majority in the European Union that assumes changes in tropical forest aggravates global warming.Oil palm planting has helped reduce poverty in developing countries like Malaysia and Indonesia.In balancing economics and ecologics, Rosediana noted these Europe-based environmental group tends to negate agriculture’s socio-economic contribution to the people of developing nations.At the PIPOC 2009 evening forum on “Palm Oil: Balancing Ecologics with Economics”, United Plantations Bhd executive director and vice chairman Datuk Carl Bek-Nielsen made a poignant statement before an audience of more than 1,000 people.“There is nothing like poverty and hunger that hastens environmental degradation.Conservation means responsible development as much as it means protection.“Today there are more than 1.4 billion people living on less than US$1.25 (RM4.22 ) per day.Whatever strategies these enviromental activists pursue to save Brazil or Borneo’s biodiversity must first offer ways for its residents to improve their lives,” he said.International banks and funding institutions need to change their way of thinking about this.Better health, better education, better economic conditions — that will help to protect the environment.“Very often we speak of the 3-P principle of People-Planet-Profit.Lets us not forget the basic needs of the people …the right to clean water, electricity, proper housing, healthcare and education,” he said.Bek-Nielsen then referred to the latest United Nations Food and Agriculture Organisation (FAO) report, which shows there are now more than one billion starving people in the world.After gains in the fight against hunger in the 1980s and early 1990s, the number of undernourished people started to climb in 1995.Hunger now affects a record of 1.02 billion people globally, or one in six.Among chief causes are financial meltdown, high food prices, drought and civil wars.FAO director-general Jacques Diouf was reported as saying that in the fight against hunger, the focus should be on increasing food production.“It’s common sense that agriculture should be given priority but …the opposite has happened,” he said.
Falling agricultural investment in developing countries over the last decade has lead to rising hunger worldwide.
Arable land for agriculture stays the same but the world’s population continue to grow.Today, it has surpassed 6.5 billion people.Going forward, it is inevitable that oil palm trees, with its high oil yield, offers a sustainable solution to help feed the world.Farmers in temperate countries have a choice of planting sunflower for vegetable oil or wheat for flour.With more global consumption of palm oil, more land can be free from the less efficient-yielding sunflower, to plant wheat to ensure enough global supply of bread and noodles.