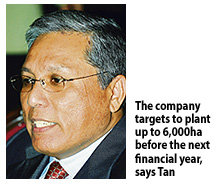 IJM Plantations Bhd (2216)expects to return to double-digit growth in crop production as early as 2012 when its oil palm venture in Indonesia starts production, its senior executives said.

The company had seven consecutive years of double-digit production growth from 2001 till 2008. The pace slowed down in the last year ended March 31 2009 as its fresh fruit bunch (FFB) production rose only 6 per cent to 600,205 tonnes.

This year, another single-digit growth is expected but not more than 6 per cent, the company executives said.

The high-growth story seems imminent again following IJM Plantations’ acquisition of up to 40,000ha in Kalimantan via four Indonesian companies.
So far, the company has completed the purchase of some 70 per cent of 40,000ha, which is about the size of Singapore.

Managing director and chief executive officer Velayuthan Tan said it needs to spend RM600 million to RM700 million to develop all the 40,000ha until maturity.

The bulk of the money would come from the RM336 million rights issue it has proposed, which was approved by its shareholders yesterday.

“We have planted oil palm on about 1,462ha in Indonesia since early this year. Our target is to plant up to 6,000ha before the next financial year,” Tan told reporters after IJM Plantations’ shareholders meeting in Subang Jaya, Selangor.

Nevertheless, Tan said average CPO price for 2009 should be higher in the second half than the first half because of shortage of vegetable oils worldwide.

The company’s average CPO price during the year was RM2,641 a tonne. Source : Business Times by Zuraimi Abdulllah