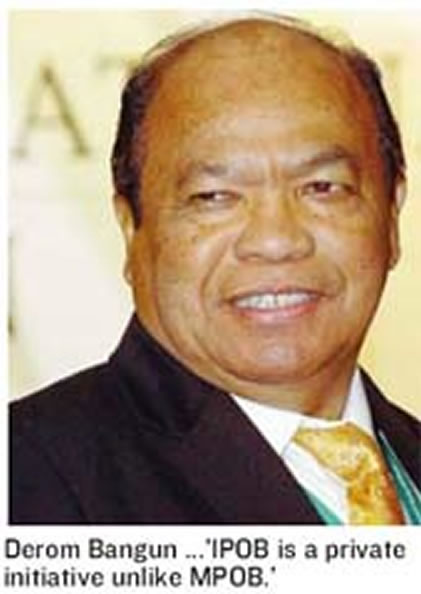 Derom told StarBiz on the sidelines at the 6th International Planters Conference (IPC 2009) organised by The Incorporated Society of Planters yesterday that Indonesia’s palm oil production for 2009 was expected to increase by 9% to about 20.3 million from 18.8 million tonnes in 2008. Unlike Malaysia which has revised downward its palm oil production projection for 2009 to 17.5 million tonnes from 17.7 million tonnes, Indonesia was confident of achieving higher palm oil production this year, he added.
IPOB was also criticised for not being able to furnish up-to-date palm oil statistics, making it difficult to gauge the overall oil palm sector in Indonesia compared with the Malaysian Palm Oil Board’s (MPOB) in-depth data.
According to Derom, IPOB is a private initiative unlike MPOB which is government-driven. “Our members can opt whether or not to provide their respective hectarage, oil extraction rate (OER), fresh fruit bunches (FFB) and CPO production. “Furthermore, it will take time to compile the details given the rapid oil palm expansion in each province,” he added.
On the rupiah-based CPO physical contract launched on the Jakarta Futures Exchange yesterday, Derom said this was a step for Indonesia to have its own CPO benchmark pricing. “All the while we had to get the benchmark price from the Rotterdam cash market with trading denominated in US dollars to determine the tariff for our CPO export duty.” He admitted that there would be a slow startup to Indonesia’s new CPO contract as “more requirements are needed to ensure smooth operation like the physical delivery, arrangement of the delivery point and the terms of delivery which are still not available.” Earlier, at the conference, MPOB director-general Datuk Dr Mohd Basri Wahid said the oil palm sector had to increase the land use efficiency by increasing productivity per unit area to remain cost competitive. In managing costs, related factors affecting cost must be addressed such as delayed replanting of old palm trees, mitigating increases of fertiliser prices, avoidance of marginal soils and good agricultural practices.]]>
You can share this posts: