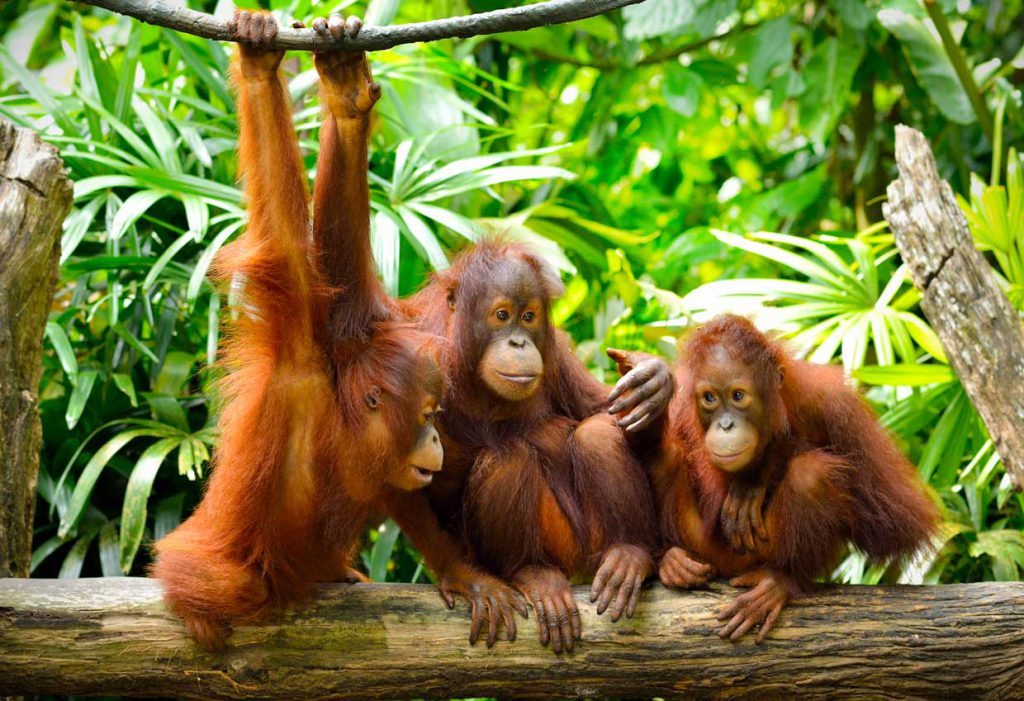 In conjunction with the International Orangutan Day 2020 on 19 August 2020, MPOC reiterates its commitment towards conserving orangutans, Asia’s one and only great ape. This day is celebrated to spread awareness of these magnificent species and help address the threats faced by them1.

Awareness is still key to ensure survival of the species”

Up until today, the public is still led to believe that palm oil is the biggest threat to the orangutans, even to the point of calling palm oil an orangutan killer. In most, if not all of the campaigns to save orangutan, these familiar provocative statements including “an area the equivalent size of 300 football fields of rainforest is cleared each hour to make way for palm oil production”, “25 orangutans are lost every day” and “orangutan will go extinct within the next 5-10 years” are often overexploited. These paint a rather grim picture of the future of orangutans if business is as usual. To generate more buzz to these campaigns, celebrities were roped in to increase the intensity of the palm oil smear campaigns.

Newest member of the orangutan family: The Tapanuli Orangutan

Palm oil is not the real enemy of orangutans

While it is a well-known fact that large scale land clearing for industrial agriculture including palm oil was a major threat to the orangutan populations in the past, recent evidence revealed hunting to be a BIGGER CONTRIBUTOR to the Bornean orangutan population decline over the last 200 years3,4. In Kalimantan, Bornean orangutans were often shot for its meat or as a result of human-orangutan conflict3. Historical data shows that the decline of orangutans was observed as far back as the 19th century, way before the start of significant oil palm development in the 1970s5.

Despite plantations being a major threat to the survival of orangutans, stories of orangutans living in oil palm landscapes is not uncommon. Orangutans have been reported to use oil palm trees for nesting and food sources6. These landscapes supported more than 10,000 orangutans7,8, showing plantations can still play a role in supporting orangutan conservation. Retaining high conservation value (HCV), high carbon stock (HCS) areas and riparian buffers, which are part of the requirements of certification schemes (eg. MSPO, RSPO, ISCC) provide these opportunities for plantation companies to actively contribute towards orangutan conservation. As long as there is connectivity between forest and plantations, these orangutans are able to move freely across the mosaic of landscapes. 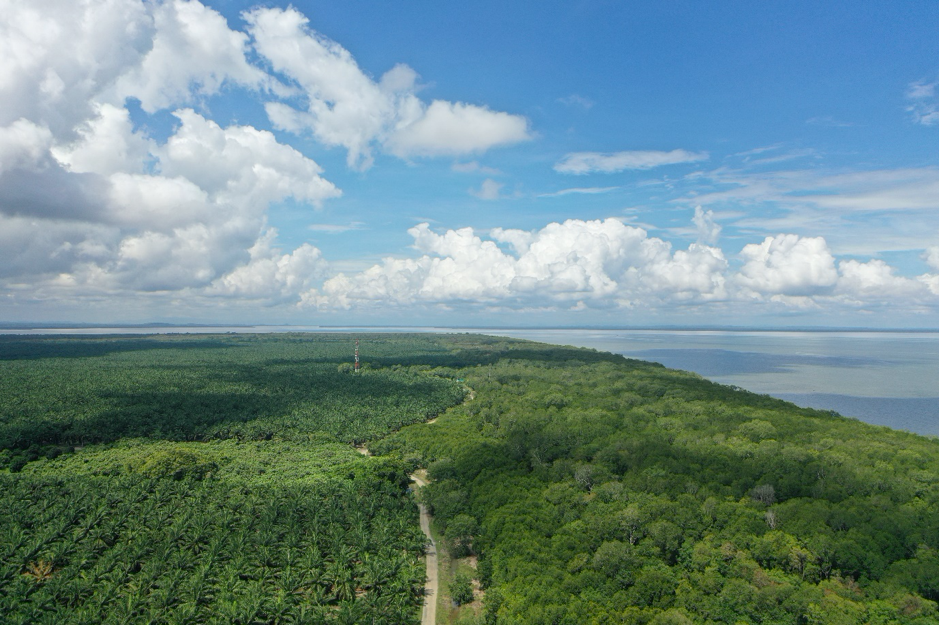 Is translocation of orangutans effective?

The current practice in orangutan rescue (mostly from poachers, wildfires or encroachment into plantation landscapes) involves rescuing orangutans, rehabilitating and releasing them back into the wild. These translocation activities are mostly done by local authorities such as the Wildlife Rescue Unit of Sabah Wildlife Department (SWD) and Sarawak Forestry Corporation as well as authorized orangutan NGOs. However, it has been suggested that these practices do nothing to halt the population decline, and also poses risk to their metapopulation health and individual welfare9, 10. 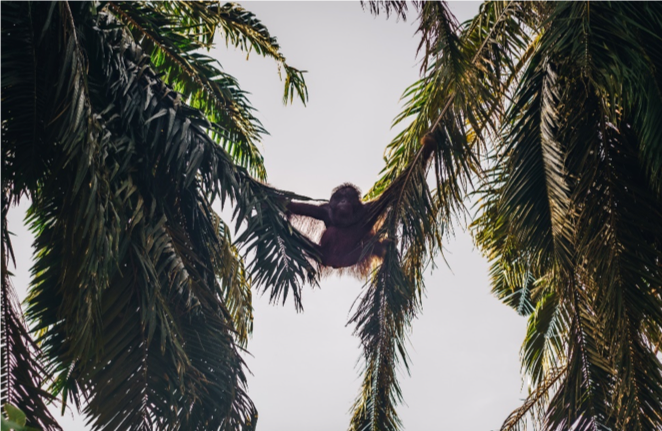 Reinforcing the above notion on the role of plantation landscapes (in conserving orangutans) is a new idea to replace translocation – to leave them where they are. This idea, known as land sharing, is not a new concept (see box). Dr. John Payne and Felicity Oram in their paper titled “Oil Palm and Orangutans: A Fresh Look and a New Idea” revealed the four elements needed to help sustain orangutan population in mixed landscapes10:

Indeed, this approach may be an alternate solution that will change the negative image of the palm oil industry, but it will require the entire industry to be on board and take a series of proactive steps. This could, after all, become a win-win solution which should benefit both orangutans and humans.

The concepts of land sharing and land sparing are examples of solutions to address the trade-offs between food production and biodiversity conservation. In simple terms, land sharing involves sharing of farmland with nature (eg. wildlife-friendly farm/plantations). Land sparing involves setting aside of land specifically for nature (eg. protected areas). Till today there is no clear answer as to which of these two concepts are most effective.

Malaysia remains committed in its pledge made at the Rio Earth Summit 1992 to uphold 50% of its land under forest cover. The recently published Global Forest Resources Assessment (FRA) 2020 report by the United Nations Food and Agriculture Organisation (FAO)12 shows that Malaysia currently maintains 19.3 million hectares or 58.8% of its total land area as forest. In Sabah, the Malaysian state with the largest orangutan population, the Totally Protected Areas has increased from 800,000 hectares in 2007 (10% of the state land area) to 1.9 million hectares (26%) in 2017 and is on track to reach 2.1 million hectares (30%) by 2025. This also includes the Heart of Borneo Initiative13.

The Malaysian palm oil industry through the Malaysian Palm Oil Green Conservation Foundation (MPOGCF) actively supports conservation initiatives of various wildlife species including orangutans. Here are some of the landmark projects that were carried out through MPOC’s funding and collaboration:

WRU was formed in 2010 to support SWD in its wildlife conservation. Up until 2017, WRU have carried out more than 500 rescue or translocation operations, including 52 Bornean orangutans.

A collaboration with Sarawak Forestry Corporation to undertake projects involving orangutan conservation efforts in protected areas in Sarawak, such as the Ulu Sebuyau National Park, Sedilu National Park, Gunung Lesung National Park and Maludam National Park. The project was launched in 2014 and completed in 2017, with a full scientific report published.

The two year survey will be undertaken in collaboration with SWD to update current status and conservation needs of these two iconic species continuing the active partnership towards the conservation of the targeted wildlife species in Sabah.

MPOC remains committed in its efforts to the conservation of orangutan, and wildlife in general.

* Malaysian Palm Oil Wildlife Conservation Fund (MPOWCF) was established in 2006 with an initial fund of RM 20 million contributed by the palm oil industry and Malaysian government. The fund is managed by Malaysian Palm Oil Council (MPOC). MPOC has the overall responsibility to manage the various conservation projects funded through MPOWCF.

As of July 2020, MPOWCF will be enhanced and rebranded as the Malaysian Palm Oil Green Conservation Foundation (MPOGCF). The Malaysian palm oil industry is currently committed to supporting MPOGCF through the payment of a conservation cess for each MT of palm oil produced in the country.