Malaysia and Indonesia, the world’s leading palm oil producers, and other palm oil producing countries may group together and file a case to the World Trade Organisation (WTO) against the European Union (EU) for introducing new laws skewed against the commodity. 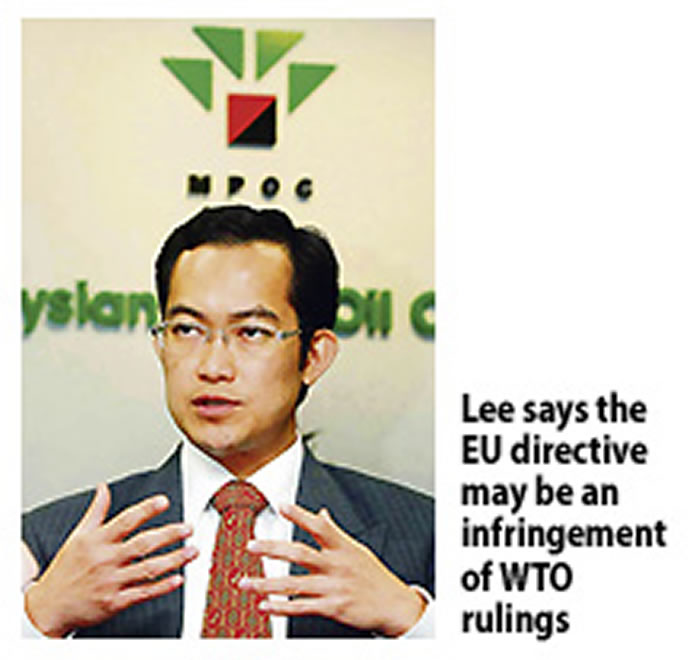 The EU directive seeks to restrict the import of palm oil for biofuel usage in Europe in favour of the heavily subsidised home-grown rapeseed oil.

Adopted in April this year, the directive will take effect in March next year, with member states given time until October to legislate it.

Since the middle of last year, the MPOC has been voicing its concern over the directive’s methodology, which understates palm biodiesel’s contribution in reducing carbon dioxide emission.

Palm oil is said to have distinct advantages over biofuel derived from rapeseed. The former generates 10 times the energy it consumes in production compared with a ratio of just three for rapeseed oil. This means that palm biodiesel has a much smaller land footprint than rapeseed.

As a low-carbon alternative to coal and petrol, and given its relatively smaller environmental footprint than other oil crops, palm oil is actually quite useful in the global fight against climate change.

Palm oil’s efficiency advantage means stiff competition for European rapeseed farmers. In view of this, the EU came up with the Renewable Energy Directive, which seeks to restrict imports to protect the highly subsidised rapeseed biodiesel producers.

Rainforest Action Network, Greenpeace, Friends of the Earth, Wetlands International and Sawit Watch have alleged that both producers were destroying the natural habitat of orang utans by felling trees to make way for oil palm estates.

“If both Indonesia and Malaysia speak out with one voice, it will be more effective,” Dr Mahathir said.

He called on the leaders of both countries to be more vocal in their stand at international forums. “This way, both countries will earn the respect of others.” Source: Business Times by Ooi Tee Ching