The Tropical Peat Research Unit in the Sarawak Chief Minister’s Department has set up three Eddy Coveriance towers to carry out an advanced carbon flux study to reinforce its early breakthrough in scientific findings that carbon dioxide (CO2) emission from oil palm plantations on peatland is lower than that of forest peat swamp. 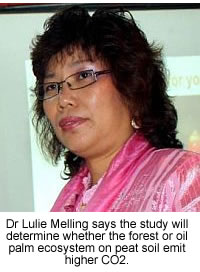 The RM5.5mil project is part of a RM15.1mil grant (2008-2012) from the federal government to carry out a study on the development of tropical peatland for sustainable oil palm production.

About 70% of Malaysia’s peatland is in Sarawak and covers about 1.6 million ha. Already some 400,000ha of peatland in Sarawak has been cultivated with oil palm.

“We will collect the data from the towers every month for analysis,’’ she told StarBiz.

She said Japanese experts would train local researchers for the project expected to take three to five years. Dr Lulie’s laboratory is the first in Sarawak that has a complete system for soil, plant, water and gas analysis.

Dr Lulie, who will be the first Asian and female to take over the International Peat Society (IPS) presidency in 2016, said the study would determine whether the forest or oil palm ecosystem on peat soil emit higher CO2.

She hoped that the results from the study would reinforce the unit’s earlier published findings that oil palm estates on peatland emitted lower CO2 than forest peat swamp. Preliminary findings also revealed that CO2 emission from plantations on peatland decreases over time.

Dr Lulie said it was necessary to carry out the carbon flux study as western non-governmental organisations (NGOs), which had campaigned against oil palm cultivation on tropical peatland, had argued that the earlier findings were insufficient to convince them that planting of oil palm on peatland should proceed. 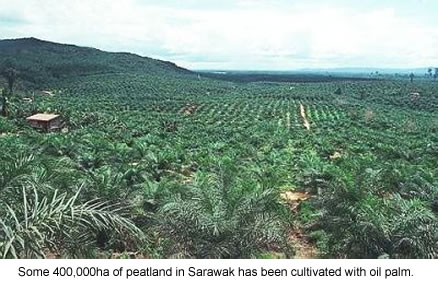 Wetlands International, a Holland-based NGO, has alleged that “South East Asian peatlands are going down the drain and up in smoke, causing huge CO2 emissions that contributed significantly to global climate change.’’

Dr Lulie said “indirect land use change’’ was now the latest global issue being used to prevent deforestation for oil palm expansion, meaning that “if you clear forest to cultivate oil palm, you cannot sell the palm oil.’’

The issue is reportedly used by the EU and NGOs to block palm oil as a sustainable biofuel in both Europe and the United States, and to prevent oil palm producers to receive subsidies from Europe.

Source: The Star by Jack Wong