Datuk Seri Najib Tun Razak, the Prime Minister of Malaysia has recently reiterated Malaysia’s commitment towards reducing its carbon intensity by 40% by 2020.1 The declaration was made at the UN Climate Summit in New York on 23 September 2014, which was a one-day public platform for leaders from both the public and private sectors to promote initiatives in reducing carbon emissions, as well as increasing the political will needed to achieve these efforts.2

The Prime Minister informed that Malaysia is meeting its targets to reduce its carbon emission intensity of its Gross Domestic Products (GDP) by 40% by 2020, compared to its 2005 levels. The target was originally declared by Malaysia during the United Nations Climate Change Conference 2009 in Copenhagen, Denmark, conditional to receiving assistance in the form of technology transfer and financing from developed countries.3

Recent policy changes have reflected Malaysia’s commitments towards the carbon emissions reduction pledge. In 2011, the introduction of the Renewable Energy Act, through its incentives (such as the improved Feed in Tariff (FiT) rates for renewable energy producers)4 and the Green Technology Financing Scheme (GTFS) enabling financial assistance5 has boosted the development of the local renewable energy industry.

The Malaysian palm oil industry plays a vital role in meeting the 40% reduction target. Oil palm, with just over 5 million hectares planted in Malaysia is the country’s second largest CO2 sink (after its permanent forest reserves) that absorb 80 Mt of CO2 from our atmosphere.6 It biomass, comprising empty fruit bunches, fronds etc is still largely untapped at the moment and have the potential to generate more than 1,300 MW of renewable energy per year through the combustion of palm biomass in power plants and methane capture facilities at the mills.7

The Climate Summit has also seen renewed commitments and pledges from other countries. China has officially announced that it would create efforts to address climate change and reduce carbon emissions.8 A declaration to stop the loss of the world’s natural forests by 2030 was also pledged by concerned governments, corporations and NGOs.9 Termed the ‘New York Declaration on Forests’,10 it was also supported by palm oil producers such as Wilmar, Golden Agri-Resources and Cargill and companies such as Dunkin Donuts and Krispy Kreme.9 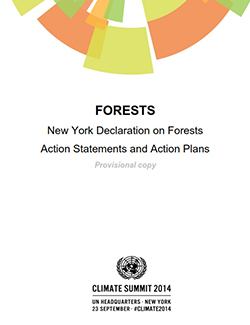 The UN Climate Summit is the largest high-level climate change meeting since the Copenhagen Conference in 2009 and was held a day before the UN General Assembly to capitalise on the presence of the world leaders in attendance.