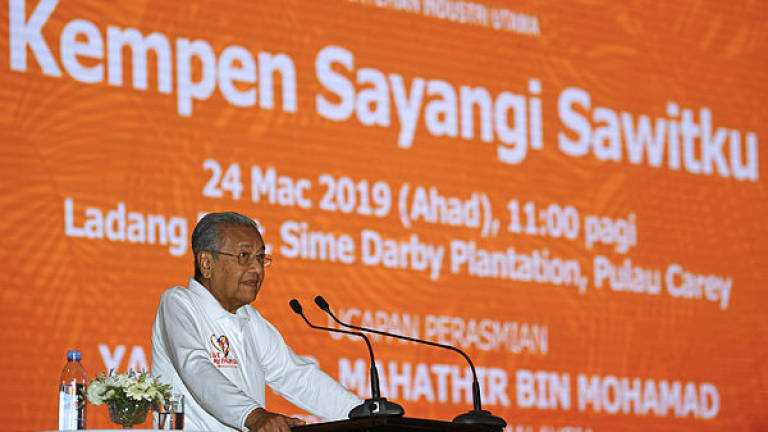 BANTING: After having warned the European Union that Malaysia would retaliate if it continued with its ban on Malaysian palm oil, Prime Minister Tun Dr Mahathir Mohamad today said that one of the retaliatory measures could be Malaysia switching to China for its fighter jets.

“If they keep on taking action against us (banning our palm oil), we will think of buying airplanes from China or any other country,“ he told a press conference after launching the “Love our Palm Oil” campaign in Ladang East, Sime Darby Plantations, Pulau Carey, here today.

Dr Mahathir, however, stressed that he was not “declaring war” on the EU as the country still needed goods from the union.

Thus, he said any action to reduce or stop imports from EU countries would not be done in haste but the impact on the nation would be studied first.

The European Parliament is reported to be in the process of banning the use of palm oil for biofuel, while the retail networks in Britain and Iceland have announced that they will stop using the commodity.

Malaysia is the top producer of palm oil in the world. Malaysia and Indonesia by themselves produce almost 90% of the world’s palm oil.

Dr Mahathir said the anti-palm oil campaign by European countries would have an impact on Malaysian palm oil exports even though they were not the biggest importers.

“Anti-palm oil sentiments in Europe against Malaysia are very strong … export of the commodity (from Malaysia) will be affected even though it is not our biggest market,” he said.

On the Philippines, which is seeking a temporary halt on palm oil imports from Malaysia and Indonesia, Dr Mahathir said the government would hold negotiations to resolve the matter.

Earlier, in his speech, Dr Mahathir expressed his disappointment that European food producers were labelling more of their products with ‘No Palm Oil’, describing it as a propaganda attempt to protect their markets.

The Prime Minister said claims by European countries that oil palm cultivation would affect the forests and wildlife like tigers, elephants as well as orangutans were not true.

He also refuted allegations that palm oil was poisonous, saying attempts to show that palm oil should not be included in food was unacceptable.

“To control their (European nations’) edible oil market, they will make allegations that palm oil is dangerous for consumption and unhealthy,” he said.

Commenting on his recent visit to Pakistan, Dr Mahathir said he watched China-made fighter aircraft participating in an aerobatic show and was impressed.

Teresa Kok, in her speech, said the Cabinet had approved a proposal to limit the expansion of oil palm plantations in the country to 6.5 million ha as a step towards ensuring the sustainability of the palm oil industry.

“In addition, the Cabinet also agreed that oil palm cultivation should not be encouraged in peat soils, while changing the use of Permanent Forest Reserves land for the cultivation of oil palm or other agricultural crops is prohibited,” she said.

A total of 4,000 invitees from various walks of life attended the inaugural campaign, which is aimed at raising public awareness on the role of palm oil in the country’s socio-economy. — Bernama