Peat soils in their natural state are wet with very high water table near to the soil surface. They are also soft as they are organic (made up of mainly rotting plant materials) in nature. Thus, peat soils are also known as organic soils.  Since peat soils are organic in nature, the bulk density is also low. The high water table and the soft nature of the soil  make peat soils soggy and it is not easy to walk on an undrained peat soil without sinking down. As such, mapping virgin peat soil areas is not liked by many soil surveyors.

In Malaysia, virgin lowland peat areas are often flooded and swampy. Much of the peat areas were marked as  swamp areas for this reason. They were left untouched and not used for farming. However, over the years, as development progressed, more and more mineral ( non organic)  soils were used up and the borders of the peat swamps were reached. In some parts of Malaysia, particularly Sarawak, there is not much option as to what type of land to use as the state has large areas of its land mass as peat.

Farming is a major economic activity which has been successfully carried out on peatland in Malaysia; starting with planting of vegetables and cash crops such as pineapples and tapioca or cassava during the second half  of the 20th century. Later, these soils were planted with rubber but the venture was not successful due to badly leaning trees which made the tapping of the trees to extract latex very difficult. The planting of  sago palms and oil palms on peat soils were then tried and found to be economically feasible.

Tropical peat has not been well studied. As such, estimations of CO2 emissions are often extrapolated based on data  from temperate peat. Thus, it is often doubted that this can be done since the factors of peat formation in temperate areas are different from that in tropical areas and the peat will be  different morpho-genetically (Paramanathan,2008; Yew et al., 2010). Temperate peat deposits are also known to be derived from bryophytes and small shrubs while tropical peat deposits are derived from various tree species with root penetration up to several meters  (Wust, 2003).

New information (Veloo et al., 2014 ) obtained from soil survey and soil classification research carried out in Sarawak, Malaysia is confirming that tropical peat soils are indeed different from temperate peat soils with many of the tropical peat soils containing wood materials in the soil solum.

Tropical peats are, however, different from temperate peat as wood is often present. When present, it may be in different stages of decomposition (Photos 1-3). There occurs a wide variety of tropical wood. This is well known since tropical wood ranges from hard, medium to soft wood. Thus, the break down or decay rate can vary depending on the types of wood present. Hard wood, for example,  is very recalcitrant and can take a long time to break down and emit CO2 during the process.

As such  sapric, hemic and fibric peat may also have the following wood fragments in the soil solum:- 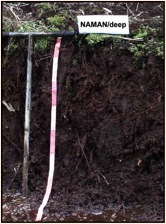 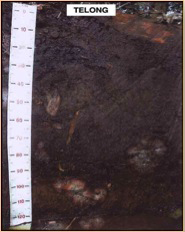 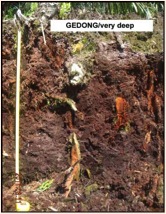 CO2 is emitted when carbon rich peat soils are disturbed for cultivation. Such emissions have an effect on climate change and this needs to be properly addressed.

EPA carried out a peer review of the emission factor for tropical peatlands drained for oil palm cultivation and the findings were reported in December 2014. The results in Table 1 show the opinions of the five  experts after their critical evaluations of the problems stated.  There was no general consensus among them with regard to the amount of peat emission and this shows the complexity and the lack of information on tropical peat soils. Nevertheless, the results in Table 1 pointed to the fact that the CO2 emissions should range between 40 to 95 tonnes ha-1year-1. In the field, CO2 emissions on peatland cultivated with oil palm are found to be on the lower end. For example, Agus et al., (2013) found that the emission from peat oxidation under oil palm cultivation was 43 t CO2 ha-1year-1. Similarly, Melling et al.,(2007) found an emission of 41 t CO2 ha-1year-1 for young mature oil palm area, with root respiration included.

Source * EPA (2014) Based on the soil survey and mapping of a total of 700,000 hectares of lowland peat in Southeast Asia, the majority of them can be classified as Saprists (Paramanathan, personal communication). Thus, the majority of lowland peat soils in Malaysia are classified as Saprists under USDA Soil Taxonomy or as Histosols under FAO/UNESCO classification. Saprists have very highly decomposed peat materials as shown in Table 2. Thus, the amount of CO2 emission when the peat soil is drained is lower for one that has sapric instead of fibric material. A larger degree of breakdown quickly takes place in a soil with fibric materials when drained, resulting in higher CO2 emission. Table 2: Type of peat and expected CO2 emission when drained

Secondly, many tropical peat soils, such as those in Sarawak, have wood fragments in the soil solum. Sometimes, they can occupy as much as 50% or more of the soil layers. When these peat soils are drained, the wood fragments do not decompose easily to add on to CO2 emission. Besides, when wood fragments are present, the amount of sapric, hemic or fibric organic soil materials which are decomposable are reduced. This reduces the CO2 emission even further when the peat soils are drained. The amount of drainage is another critical factor that determines CO2 emission; a higher emission is linked to deeper or more intense drainage. Most oil palm roots are concentrated in the top 50 cm of the peat soil. Oil palm plantations keep a high water table at 50-70 cm by following RSPO’s Best Management Practices for oil palm cultivation on peatland so as to obtain better yields.

Most of the publications on CO2 emission on drained tropical lowland peat soils have been extrapolated from experiences based on temperate peat. This has been a consequence of the general lack of information and experience with tropical peat. New evidence obtained from detailed soil surveys, mapping and classification shows that the majority of Malaysian lowland peat soils are mainly sapric and with many of them containing wood. Coupled with the fact that peat soils are not excessively drained when planted with oil palm, the cultivation of such soils have lower CO2 emissions than what is reported currently.