Malaysia is unlikely to repeat its record 2008 export earnings from commodities including palm oil, rubber and timber of RM112.4 billion this year, due to declining commodity prices caused by the global economic crisis.

It would be the first annual decline in four years. Palm oil export earnings are expected to dip by 25 per cent to RM50 billion this year, even though the country has initiated measures to cushion the fall such as replanting efforts. For palm oil and palm oil-related products, exports hit a record RM65.2 billion in 2008, a 44.3 per cent jump compared with RM45.1 billion a year ago as prices rose to a historical high of RM4,486 per tonne in March 2008. 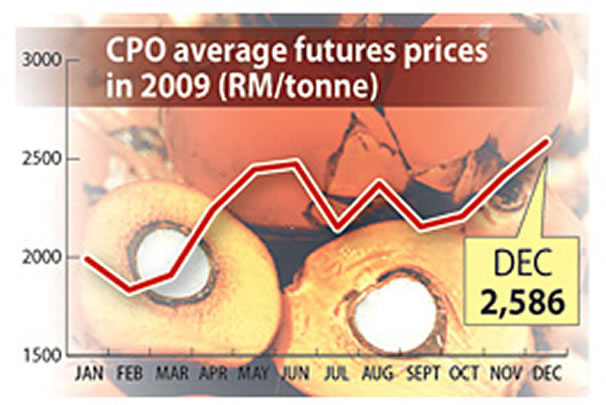 This year, with prices at about half of last year’s record high, coupled with lower production and erratic world demand, earnings will likely be weaker.

“But crude palm oil (CPO) prices will be okay next year, ranging between RM2,300 per tonne and RM2,700 per tonne due to steady global demand, tree stress and a possible resurgent of the El Nino,” said Malaysian Palm Oil Board (MPOB) chairman Datuk Sabri Ahmad. Palm oil earnings from companies such as Sime Darby Bhd, IOI Corp Bhd and Kuala Lumpur Kepong Bhd to the Federal Land Development Authority (Felda) are all expected to fall this year from last year’s record highs, dragged by weaker CPO prices. The oil palm sector throughout the year also grappled with false and repeated claims by Western non-governmental organisations and media that orang utan habitats in the state were under threat from oil palm plantations and this antagonism is expected to carry on next year. The industry also endured numerous criterias set by the Roundtable on Sustainable Palm Oil, which has endlessly imposed health, environment and other sustainability criteria before the commodity can be exported to Europe. This is expected to continue well into next year. 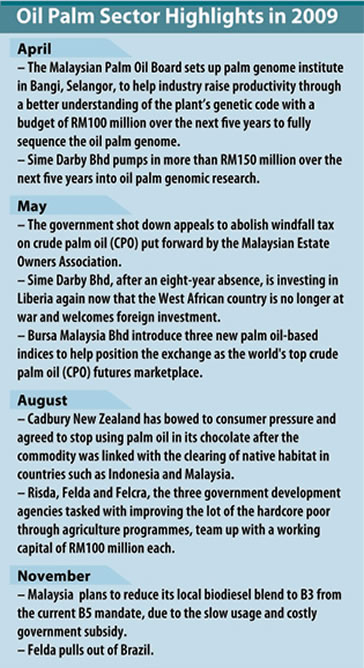 Source : Business Times by Zaidi Isham Ismail
]]>
You can share this posts: