OBSERVATIONS: Weighed down by the meltdown on global equity and commodity markets, the Kuala Lumpur CPO futures market plummeted below the psychologically significant RM2,000 a tonne level, a price not seen since early April this year.

The actively-traded September 2009 contract dived to an intra-week low of RM1,983, before recovering some on short-covering to settle last Friday at RM2,010, down RM165 or 7.59 per cent over the week.

Concerns that the world economy would sink into deeper recession sent global financial markets reeling last week. Crude oil slumped to US$60 a barrel, down from the week earlier level above US$70 (US$1 = RM3.57). The catalyst was the US government report that the unemployment rate there had surged to a 26-year high of 9.6 per cent.

Feeble attempts at rallies were undermined in part by the jawboning of a clutch of so-called “experts”, who have begun talking down this market. Until the previous week those “experts” have either been silent on the trend of this market or had still held bullish views. Now the overall “expert” opinion is that palm oil is likely to trade below RM2,000 a tonne on average for the rest of this year. The Malaysian Palm Oil Board (MPOB) report on June trade data and end-June stocks was neutral in its effect on this market. The MPOB put end-June 2009 stocks at 1,405,500 tonnes, up 34,262 tonnes or 2.5 per cent but well below market expectation of a 4.6 per cent increase in stocks.

Conclusion: There should be more downside to this market, if the technicals are any guide. 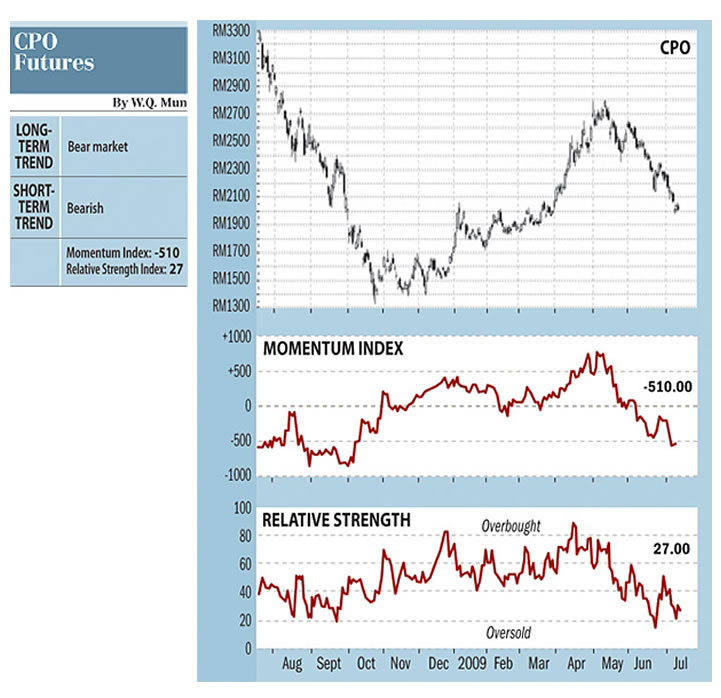