M’sia to Benefit From Indonesian Withdrawal of Bill Limiting Foreign 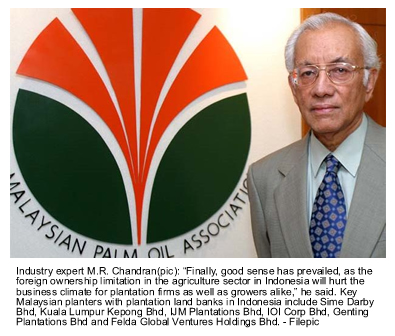 PETALING JAYA: Indonesia has finally agreed to withdraw the proposed draft Bill on foreign ownership limitation in its agriculture sector, which had faced opposition from many foreign plantation business owners, including Malaysian planters with operations in the republic.

In the final discussion on Agriculture Law revision No. 18/2014 that was held on Monday, both the Indonesian Parliament and government have agreed on the withdrawal of the proposed 30% foreign ownership limitation from the present 95%.

The Indonesian Parliament has scheduled the Plantation Bill to be ratified at the plenary meeting on Sept 29, and “ should the ratified Bill be passed, this would be relatively positive for the plantation players there,” according to industry expert M.R. Chandran.

“Finally, good sense has prevailed, as the foreign ownership limitation in the agriculture sector in Indonesia will hurt the business climate for plantation firms as well as growers alike,” he said.

Chandran said the reasons behind the withdrawal of the proposed draft Bill was due to the plantation sector being one of the largest contributors to foreign reserves in Indonesia.

Thus, it would erode the interest in palm oil downstream investment, which the Indonesian government has been trying to promote aggressively in recent years.

He also expects the important points likely to be included in the revised agriculture law to be:

·The submission of data and information on plantations possibly similar to the regulations imposed by the Malaysian Palm Oil Board.

·The integration between oil palm and cattle farming.

·The integrated mapping between agriculture, horticulture and the food sector.

·The obligation for planters to use local seeds and fertilisers.

On the integration between oil palm and cattle farming, Chandran opined that “this can be a costly nightmare venture as experienced by Sime Darby, Kumpulan Guthrie and Golden Hope Plantations Bhd, as well as Risda and Johor Corp back in the 1990s in Peninsular Malaysia”.

In addition, the obligation for planters, particularly among foreign plantation companies, to use local seeds and fertilisers could be another risk factor due to quality concern.

“This is an eco-system whereby both upstream and downstream industries benefit from the value creation and addition process.”

Based on Poram’s observation, when crude palm oil (CPO) is exported, the upstream industry will benefit, thus leaving the downstream industry weak and unable to survive due to insufficient CPO supply and negative refining margins.

Over time, the downstream players would either collapse or migrate to other places where it is economically sensible to operate in.

Furthermore, the value creation of the downstream industry, along with its economic spin-offs, would disappear and migrate too.